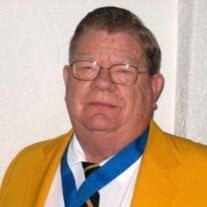 Age 70, passed away at his home on Monday, January 6, 2014. He was born September 5, 1943, in Ann Arbor, MI, the son of Raymond and Dorothy (Randolph) Colby. On December 19, 1964, at Bethel United Church of Christ in Freedom Twp., he married Carol A. Guenther and she survives. Jim was a self-employed painting contractor for over 45 years. He was also a member of Bethel United Church of Christ and the Ann Arbor Moose Lodge #1253. He was an avid bowler for over 50 years. In addition to his wife, other survivors include his children, Kimberly (Vance) Swindoll and Jennifer and Teri Colby, grandchildren, Anthony and Kendra Colby, Aaron and Kristen Timlake and Adam and Alexis Colby, great-grandson, Jaccari James and sisters, Phyllis (Bill) Braun and Barbara Welton and many nieces and nephews. He was preceded in death by his parents and two brothers, David and Gary Colby. Visitation will be on Thursday, January 9, 2014, from 2:00-8:00 P.M at Robison-Bahnmiller Funeral Home in Saline and at Bethel United Church of Christ in Freedom Twp. on Friday, January 10, 2014, from 10:00 A.M. until the time of the service at 11:00 A.M. with Rev. David Bucholtz, officiating. Cremation will follow the services. There will be a Moose Pilgrim memorial service held on Thursday, January 9, 2014 at 7:00 P.M. at the funeral home. In lieu of flowers, memorial contributions may be made to the church, or the Ann Arbor Moose Lodge #1253. Envelopes will be available at the funeral and the church. To sign Jim’s guestbook, to leave a memory or for more information please visit www.rbfhsaline.com.

The family of James Earl Colby created this Life Tributes page to make it easy to share your memories.

Send flowers to the Colby family.