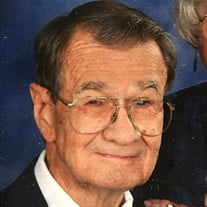 James Walter Duncan of Saline, MI, surrounded by his family, went to be with his Lord and Saviour on Saturday, March 14, 2015 after a lengthy illness. James was born in Grand Rapids, MI in 1935, to Walter and Hannah (Pearson) Duncan. James obtained his Bachelors and Masters degrees in Economics from the University of Michigan, where he also played the clarinet in the U of M Marching Band. James spent thirty-five years at University Microfilms International/ProQuest where he was Vice President of Manufacturing. He was beloved by his employees and colleagues, and he held in high regard all the people he worked with over his career. He and his wife Marcia, were privileged to restore the Old First Methodist Church of Saline where they had their store, The Calico Cat Book and Gift Shoppe, for many years. James and his wife were one of five founding families of Huron Hills Baptist Church in Ann Arbor, MI, where he served as finance director during the construction of the building, and then later served as treasurer. He also served on the Scio Township Board for many years. James' hobbies included reading, fishing, boating, and restoring buildings in Manchester and Saline. He loved spending time with his family and vacationing at Glen Lake in Northern Michigan. Survivors include his beloved wife Marcia, of 58 years; daughter Beth, (Dan Ragle) of Milan, MI; son James, (Blanca) of California; son Eric of Whitmore Lake; daughter Leslie, (Kip Read) of Ypsilanti, MI; and three grandsons, Jonah Duncan, Ashton Caleb, and Hunter Tristan Read. Other survivors include his older brother Donald Duncan of Minneapolis, and younger brother Jack, (Shirley) Duncan of Indiana; sister-in-law Laurie, (Dennis Bayma) of Virginia, and brother-in-law Fritz, (Judy) Miller of Arizona. Funeral Services will be held on Friday, March 27, 2015 at 11:00 A.M. at the First United Methodist Church in Saline, with Rev. Dr. James E. Tuttle officiating. Burial will take place at Oakwood Cemetery, Saline. A Luncheon will follow at the church. In lieu of flowers Memorial contributions may be made to the American Cancer Society, American Kidney Foundation, or the Multiple Sclerosis Society of Michigan. Envelopes will be available at the church where friends may begin calling on Thursday, March 26, 2015 from 4:00 P.M. to 8:00 P.M. and on Friday, March 27, 2015 from 10:00 A.M. until the time of service at 11:00 A.M. To sign James’ guestbook, to leave a memory, or for more information or directions please visit www.rbfhsaline.com.

James Walter Duncan of Saline, MI, surrounded by his family, went to be with his Lord and Saviour on Saturday, March 14, 2015 after a lengthy illness. James was born in Grand Rapids, MI in 1935, to Walter and Hannah (Pearson) Duncan. James obtained... View Obituary & Service Information

The family of James W. Duncan created this Life Tributes page to make it easy to share your memories.

James Walter Duncan of Saline, MI, surrounded by his family,...

Send flowers to the Duncan family.