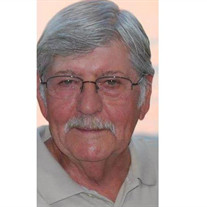 James Richard Hinkle, 76, of Ypsilanti Township, Michigan, passed away on Friday, June 23, 2017 at his home surrounded by his family after succumbing to cancer. James Richard, or Rick as most people knew him as, was born in Inez, Kentucky to Lorenze and Oma Hinkle and was the oldest of four children. He graduated from Inez High School in 1959 and joined the Navy in 1960 where he served aboard the USS Tanner (AGS-15) for four years. He then entered the reserves for two years. Later, in 1974, he would go on to graduate from Washtenaw Community College with a Business Degree. In 1964 James (Rick) began a long career in the Automotive Industry, at the Saline Ford Plant in Saline, Michigan. During his 32 years he was a hard worker and even served as Committee Man. After retiring from Ford he worked part-time for Crime Prevention. Rick was a longtime member of Metro Baptist Church in Belleville and a devoted Christian. In 1973 Rick met his wife Yonna Lambert and they married in 1974. They spent 43 wonderful years together. They enjoyed gardening and traveling together. In December of 1977 they welcomed their first child, a daughter named Kristina Hinkle-Eaton (John Eaton) of Ann Arbor, MI, as a younger sibling to Susan Lynn Hinkle (Alan Husmann) of Encinitas, CA. James and Yonna enjoyed watching and playing with their four grandsons Ross Eaton of Ann Arbor, Ezekiel Husmann of Encinitas, Joshua Husmann of Encinitas, and Preston Eaton of Ann Arbor with joy and pride. They have made some precious memories together from the beaches of California to the baseball fields and hockey rinks of Michigan. James is survived by his wife, Yonna, daughters Kristina (John Eaton) Hinkle-Eaton, Susan (Alan) Husmann; grandchildren Ross Eaton, Ezekiel Husmann, Joshua Husmann, and Preston Eaton; brother Lewis (L.C.) Hinkle, sisters Betty (Stellard) Martin, and Bonnie Burgess, as well as many loving aunts, uncles, in-laws, nieces, nephews, cousins, and friends. James was preceded in death by his parents Lorenze and Oma Hinkle. Funeral Services will be held on Wednesday, June 28, 2017 at 11:00 A.M. at the Robison-Bahnmiller Funeral Home in Saline, with Pastor John L. Vaprezsan officiating. Memorial contributions and love offerings may be made to the family. Envelopes will be available at the funeral home where friends may join the family for a time of visitation on Tuesday, June 27, 2017 between 4:00 P.M. and 7:00 P.M. and on Wednesday, June 28 from 10:00 A.M. until the time of service at 11:00 A.M. Burial will follow in the Oakwood Cemetery in Saline. Military Honors will be held under the auspices of the Veteran’s Honor Guard of Washtenaw County. A luncheon will follow the graveside service at Metro Baptist Church, 47100 North Interstate 94 Service Drive, Belleville, MI, 48111. To sign Rick’s guestbook, to leave a memory, or for more information or directions please visit www.rbfhsaline.com.

James Richard Hinkle, 76, of Ypsilanti Township, Michigan, passed away on Friday, June 23, 2017 at his home surrounded by his family after succumbing to cancer. James Richard, or Rick as most people knew him as, was born in Inez, Kentucky to... View Obituary & Service Information

The family of James Richard Hinkle created this Life Tributes page to make it easy to share your memories.

Send flowers to the Hinkle family.