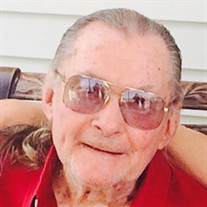 Age 80, passed away at his home on Thursday, July 30, 2015. He was born on September 7, 1934 in Toledo, Ohio, the son of James B. and Rayonette (Fraley) Hanna. On March 10, 1956 in Angola, Indiana, he married Carol A. Stinefield (wife of 59 years) and she survives. Jim graduated from DeVilbiss High School in 1952 and headed the DeVilbiss H. S. band. In 1958 he graduated from Tri-State University in Angola, Indiana, with a Bachelor’s degree in Mechanical Engineering. Jim was also in the United States 555th Air Force Reserve Band in Swanton, Ohio from 1952 to 1960. Jim and Carol founded Mectron Engineering Co., Inc., an international inspection business in Saline and Jim has been active in the business until he passed away. He and Carol also founded and ran the Giant Flea Market from 1976-1991. Jim was passionately involved with his small farm raising hay for grass fed beef and fostering 4H animals for his grandchildren. His dog “Kosan” was his constant companion. In addition to his wife, he is survived by his children, Kristen Hanna, Mark Hanna, Keira Hanna-Rockwell, Kendra McClure, and son-in-law, David Rockwell. His grandchildren include Stefan, Josh, Andrew, Casey, Shannon, Mary, Christopher, Mitchell and Colin. He was preceded in death by his parents. Visitation will be held on Saturday, August 1, 2015 from 12:00-3:00 P.M. at the Robison-Bahnmiller Funeral Home, Saline. Entombment will take place privately at Washtenong Memorial Park in Ann Arbor. In lieu of flowers, memorial contributions are requested to Trine University, School of Engineering, (formerly Tri-State University), 1 University Ave., Angola, IN 46703 and envelopes will be available at the funeral home. To sign Jim’s guestbook, to leave a memory, or for more information or directions please visit www.rbfhsaline.com

The family of James "Jim" Lee Hanna created this Life Tributes page to make it easy to share your memories.

Send flowers to the Hanna family.