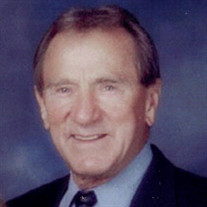 Age 86, passed away on Friday, January 20, 2017 in his home in Saline. Jim was born June 30, 1930 in Detroit, Michigan, to Samuel William and Gerda (Aarhus) Kremidas. He obtained a Bachelor of Mechanical Engineering Degree from the University of Detroit in 1957 and was employed by Bendix Research Labs where he was awarded several patents. He also worked on the Apollo Lunar Roving Vehicles while at Bendix. In 1971 he left Bendix to work at Ford Motor Company in Dearborn, While at Ford, Jim obtained a Master of Business Administration Degree and also met his loving wife, Paula. They were married in Greenfield Village at the Martha-Mary Chapel in Dearborn on December 26, 1981. Jim and Paula lived in Southern California for several years before returning to Michigan and finally settling in Saline where they have spent the last 23 years. After returning to Michigan, Jim began a residential development and building company in partnership with his son. Jim loved to ski and was a ski instructor and member of the National Ski Patrol at Alpine Valley Ski Area in White Lake, Michigan. Jim and his family spent many happy days skiing in Michigan, Colorado and California. He enjoyed traveling, swimming, boating, running, biking and football, but more than anything, he loved and was devoted to his family and friends and pets. He took great pleasure in playing jokes on his friends and he loved to laugh. Jim was good-natured and warm-hearted with a great sense of humor and sparkling eyes. The world has lost a true gentleman who many people looked up to and loved. Jim will be truly missed - his kind heart, his humor and his caring attitude. Jim is survived by his wife of 35 years, Paula, and their daughter, Dana. He is also survived by his daughter-in-law, Kelly, his grandchildren, McKayla and Danica, his sister Gloria (Jerry) Eshkanian and his brother, Bill. Jim was preceded in death by his son, Kurt. He is lovingly remembered by all who knew him. We will miss his dear face, but he will live forever in our hearts and souls. There will be a private memorial dinner for family and friends held in Jim’s honor on Saturday evening, March 4th, 2017. Details will be mailed to invited guests by Jim’s family. Contributions in Jim’s name may be made to the Humane Society of Huron Valley – www.hshv.org – or St. Jude Children’s Hospital – www.stjude.org.

Age 86, passed away on Friday, January 20, 2017 in his home in Saline. Jim was born June 30, 1930 in Detroit, Michigan, to Samuel William and Gerda (Aarhus) Kremidas. He obtained a Bachelor of Mechanical Engineering Degree from the University... View Obituary & Service Information

The family of James Robert Kremidas created this Life Tributes page to make it easy to share your memories.

Send flowers to the Kremidas family.