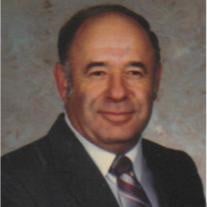 Age 78, passed away on Wednesday, April 4, 2012 while on vacation in Florida. Jim was born April 25, 1933 in Saline, MI, the son of Daniel and Lucille (Schill) Levleit. On December 8, 1956, he married Bonnie Howard and they celebrated nearly 56 years of a loving and happy marriage. Jim was very proud to have served in the United States Army during the Korean War, and was stationed in Germany. After returning from the war, Jim came home to help at the Levleit’s Bishop Rd. farm. In the early 1950’s the City of Saline hired Jim, first as a police officer, later promoting him as the Chief of Police. During his esteemed career in law enforcement, Jim earned his Bachelor’s degree in criminal justice from Siena Heights College. Following college he went to the FBI Academy in Quantico, VA. Upon retiring from the Saline Police Department, Jim was hired as the City Administrator of Saline, a position he held until 1989. After this second retirement, he went to work in real estate with the Brookshire Association, remaining active in real estate until the time of his death. Jim was successful in all of his endeavors, especially enjoying the lasting friendships made with his coworkers. He loved family gatherings, and his grandchildren brought him extra special joy. A notable favorite memory was Jim fixing big breakfasts with the help of his granddaughter Jordan. Jim was a life-long member of Trinity Evangelical Lutheran Church in Saline, a member of the Saline American Legion, and he belonged to many other charities and organizations. In addition to his wife Bonnie, other survivors include his three children, Sandra Hickey of Saline, James Louis (Sherry) Levleit, Jr. of Milan and Patti (Ryan) Robinson of Hilton Head Island, SC; three grandchildren, Jason (Melissa) Vest, Scott Mast and Jordan Robinson; great-granddaughter, Mackenzie Hertler; brother, Daniel (Gerry) Levleit of Portage Lake, and sister Jeanne (Larry) Carr of Kentucky. There are also many nieces and nephews whom Jim loved. He was preceded in death by his parents, brothers, Maurice (Dottie) Levleit, David Levleit, sister, Joanne (Bob) Hinsch and his step-mother, Melinda Levleit. Memorial Visitation will be Friday, April 27, 2012 at the Trinity Evangelical Lutheran Church in Saline, from 10:00 AM until the time of the Memorial Service at 11:00 AM with Pastor William Natsis and Pastor Mark Smith officiating. Immediately following the Memorial Service, there will be a military flag presentation, under the auspices of the Veterans Honor Guard of Washtenaw County. In lieu of flowers, Memorial Contributions are requested to the Church and Saline Area Social Services. Envelopes will be available.

Age 78, passed away on Wednesday, April 4, 2012 while on vacation in Florida. Jim was born April 25, 1933 in Saline, MI, the son of Daniel and Lucille (Schill) Levleit. On December 8, 1956, he married Bonnie Howard and they celebrated nearly... View Obituary & Service Information

The family of James L. Levleit Sr. created this Life Tributes page to make it easy to share your memories.

Send flowers to the Levleit family.