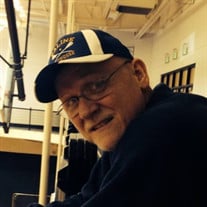 Age 58 years, passed away at his home on Thursday March 19, 2015 after a brave battle with Synovial Sarcoma diagnosed in June 2012. His loving wife, Kim and their amazing children, Jessi and Dustin by his side. Jim (Bud) was born on September 25, 1956 in Saginaw, MI, the youngest son of Marshall and Genevieve (Trybulski) Markey. On February 1, 1992 he married his best friend, Kimberly Ann Bow and she survives him. They had a wonderful wedding with their family and friends present and built a beautiful life together. Jim is also survived by the lights of his life, his children, Jessica Lynn and Dustin James Markey. Also surviving him is his mother, Genevieve Markey, brothers, Lawrence Markey and Ronald (Marilyn) Markey, mother-in-law, Judy Bow, sisters-in-law, Dona Kilbourn, Sandra (Barry) Brunskill, and Susan Sells. Many very special nieces, nephews, and cousins from Michigan, Florida, California, Texas, Iowa and Georgia, along with many wonderful lifetime friends that meant the world to him. Jim was preceded in death by his father, Marshall Markey, sister, Karen Halm, father-in-law, Donald Bow, mother-in-law, Nancy Bow and brother in law, Curtis Bow. He worked as a Tool Maker at Shear Tool in Bridgeport, MI for more than 20 years before moving his family to Saline, MI in 1996 accepting employment with Ford Motor Company. Jim recently moved into inspections at Ford working throughout his illness until no longer able to do so in November 2014. Cremation has taken place. Visitation will be on Monday, March 23, 2015 from 4:00-8:00pm at the Robison-Bahnmiller Funeral Home, 301 E. Michigan Ave., Saline, MI and on Tuesday, March 24, 2015 from 10:00am until the time of the Mass of Christian Burial at 11:00am at St. Andrew the Apostle Catholic Church, 910 Austin Dr., Saline, MI with the Rev. Fr. Francis Mossholder, celebrant. In lieu of flowers, memorial contributions may be made to the family in c/o Kimberly Markey or to the Sarcoma Cancer Clinic at the University of Michigan Hospital. Envelopes will be available at he funeral home and church. To sign Jim's guestbook, to leave a memorial or personal memory about Jim, or for more information and directions, please visit www.rbfhsaline.com.

Age 58 years, passed away at his home on Thursday March 19, 2015 after a brave battle with Synovial Sarcoma diagnosed in June 2012. His loving wife, Kim and their amazing children, Jessi and Dustin by his side. Jim (Bud) was born on September... View Obituary & Service Information

The family of James Frank Markey created this Life Tributes page to make it easy to share your memories.

Send flowers to the Markey family.