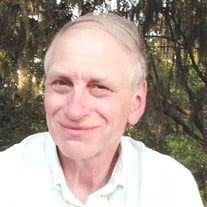 James Scott (Jim) Seck, age 67, finished his race and received his heavenly crown late in the evening Wednesday, June 11, 2014 after a two year battle with cancer. He was born December 4, 1946 in Virginia, Minnesota, son of Earl and Cynthia (Beste) Seck. Jim served as an officer in the Army Reserve. He graduated from the University of Minnesota with a M.S. in computer science. He was a software architect with Sycor, Bell Northern Research, and Unisys Corporation, pioneering many innovations in backroom banking. He married Linda Steever on March 16, 1968. He and Linda enjoyed 46 years of faithful marriage. Jim served as an active member of Crossroads Community Baptist Church for many years. Beloved husband, father, grandfather, and crossword-puzzle enthusiast, Jim will be lovingly remembered for his bright mind, selfless generosity, and quiet integrity. He is survived by his wife, Linda; three children: Lori (Rodney) Gleason, Jenny (Chris) Watkins, and Michael, and one grandchild, Macy Grace. He is also survived by his mother, brother Ronald (Jeannie) and sister Linda (Jonathan) Krier and many nieces and nephews. He was preceded in death by his father Earl Seck. Visitation will be held on Friday, June 13, 2014 from 5 p.m. to 8 p.m. at the Robison-Bahnmiller Funeral Home 301 E. Michigan Ave, Saline. There will be visitation at Crossroads Community Baptist Church 2580 Packard Road, Ann Arbor from 12:00 P.M. to 1:00 P.M. Saturday, June 14, 2014 prior to funeral services held at 1 p.m. A committal service will take place at Oakwood Cemetery in Saline on Saturday, June 14, 2014 at 4:00 P.M. followed by Military Honors under the auspices of the Washtenaw County Veterans Honor Guard. In lieu of flowers, memorial contributions may be made to Crossroads Community Baptist Missions Fund or Arbor Hospice and envelopes will be available at the funeral home and the church. To sign Jim’s guestbook, to leave a memory, or for more information or directions please visit www.rbfhsaline.com.

James Scott (Jim) Seck, age 67, finished his race and received his heavenly crown late in the evening Wednesday, June 11, 2014 after a two year battle with cancer. He was born December 4, 1946 in Virginia, Minnesota, son of Earl and Cynthia... View Obituary & Service Information

The family of James Scott "Jim" Seck created this Life Tributes page to make it easy to share your memories.

Send flowers to the Seck family.