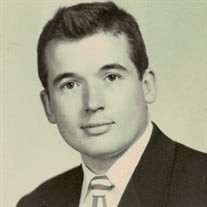 Our dad, James (Jim) Suits passed away peacefully with family at his side on Sunday, May 19, 2019 at StoryPoint Assisted Living in Saline. Jim was born on April 15, 1930 to Emil Suits and Hazel Puff. Jim graduated from Ann Arbor High School in 1948 where he met the love of his life, Jerry Feiner. Jim played football in high school and also got his pilot’s license. He took Jerry flying on their first date in 1948. They were married on July 1, 1950. He graduated from the University of Michigan with an M.B.A. He began his business career as an C.P.A. at Icerman, Johnson, and Hoffman in Ann Arbor, where he later became a partner. He continued working there as a partner during the firm changes as Touche Ross and then Deloitte. He retired in 2008. He served as Treasurer of the First Baptist Church of Ann Arbor for over fifty years. Jim was an accomplished water skier and spent many summers skiing with family and friends at the family cottage on Portage Lake. He was known for his no hands, slalom trick! He loved model trains and Corvettes. He was a carpenter and craftsman, planning and building porches for both his home and the cottage. He was a lifelong University of Michigan sports enthusiast, attending basketball and football games and wrestling meets. He loved classical music and a good book, and could be found with music blaring and his head in a kindle right to the last week of his life. He loved dogs, especially dachshunds. Jim is predeceased by his wife Jerry, brother William D. Suits, and grandson Joe. He is survived by his three children, Lynn M. Suits, (David Lamkin), Kathy Suits Keeping (Alan), and Charles Suits, (Betsy). Also surviving are grandchildren Martin McDonald (Gina), Karl Suits, David Suits, (Marcha), John Suits, (Ellen), Scott Siler, Sarah Suits Obenauf, (John), and Daniel Siler. Great-grandchildren include Keira McDonald, R.J. Suits, Jimmy Suits and Emma Suits. Private service to be held at Forest Hill Cemetery. A special thank you to the staff at StoryPoint Assisted Living and Kindred Hospice. Donations may be made online at https://dachshundhausrescue.org/ or mailed to Dachshund Haus Rescue, 13375 Cloverlawn Dr., Sterling Heights, MI. 48312. To leave a memory you have of Jim or to sign his guestbook please visit www.rbfhsaline.com.

Our dad, James (Jim) Suits passed away peacefully with family at his side on Sunday, May 19, 2019 at StoryPoint Assisted Living in Saline. Jim was born on April 15, 1930 to Emil Suits and Hazel Puff. Jim graduated from Ann Arbor High School... View Obituary & Service Information

The family of James R. Suits created this Life Tributes page to make it easy to share your memories.

Our dad, James (Jim) Suits passed away peacefully with family...

Send flowers to the Suits family.