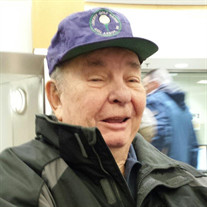 James Davis Williams of Saline, MI, passed away on Friday, November 23, 2018 at the University of Michigan Hospital at the age of 91. James was born on December 10, 1926 in Eccles, West Virginia the son of Norvill and Gertrude Lois (Evans) Williams. He graduated from Trapp Hill High School in Beckley, West Virginia. After graduation he headed off to Purdue University for a short time before he was drafted. James was a proud member of the United States Army and served during WWII as a paratrooper. After returning from the war he enrolled in and graduated from the University of West Virginia with a degree in Physical Education. Following graduation he moved to Cleveland, Ohio where he met his wife Louise and together they resided in Euclid, Ohio. On July 13, 1957 in Angola, Indiana he married Louise H. Williams and she preceded him in death on March 22, 1993. James helped to raise four stepchildren with Louise and loved them all very much. He served as an electrician for over 40 years and worked for TRW and the Penn Central Railroad. James loved sports, especially baseball, and passed this love of sports along to his daughter Debbie. He was so proud of Debbie and cherished all of the wonderful accomplishments that she achieved. Survivors include his daughter Debbie (Paul Hoak) Williams-Hoak, nieces Rita Wood, Rachel Papa and Sandra Tudilinsky, nephews John Daniels and Jim Williams, stepchildren Kathryn (Tom) Zogorski, Kenneth Zust, and Judith Norval, step grandchildren Emily Hoak Snyder and Paul Hoak III, step great-granddaughter Eliza Hoak Snyder, and step great nieces and great nephews. He was preceded in death in addition to his wife by his parents, brothers Kenneth Jack and Thomas, sisters Leah, Marjorie and Janavee, his stepson James Zust, and his daughter-in-law Carol Zust. Cremation has taken place and a memorial service will be held in the future. To leave a memory you have of James, to sign his guestbook, or for more information please visit www.rbfhsaline.com

James Davis Williams of Saline, MI, passed away on Friday, November 23, 2018 at the University of Michigan Hospital at the age of 91. James was born on December 10, 1926 in Eccles, West Virginia the son of Norvill and Gertrude Lois (Evans) Williams.... View Obituary & Service Information

The family of James Davis Williams created this Life Tributes page to make it easy to share your memories.

Send flowers to the Williams family.