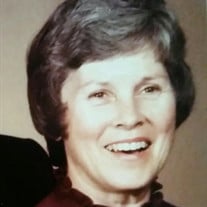 Janet Eileen Gannaway, wife of Edwin LeFlore Gannaway passed from this life in Saline, Michigan and entered Paradise early Friday morning on June 16, 2017. She was 89. Janet was born to Norman John and Martha Temme Reister on October 24, 1927 and is preceded in death by her parents and sister, Nancy Ballantyne. She is survived by “Ed” and their three children Marcia and husband Matthew Floding of North Carolina, Linda and Husband Jim Marshall of Michigan, and Tom and wife Gail Gannaway of Colorado. Ed and Janet have been blessed with wonderful family: grandchildren Geoffrey (and Ashley) Floding, Katy (and Mario) Evans, Ami (and John) Atkocaitis, Greta (and Kevin) Jasker, Abbi Marshall, and Ryan Gannaway; great grandchildren Zoi, Micah, Eliana, and Lincoln; and beloved nieces Leigh Anne (and Neil) Kraft, and Marti Beth (and Jeffrey) Frye. Janet’s quiet child-like faith in Christ was evident to all who knew her. She served her family, churches and communities without fanfare or need for recognition, and her manner was to speak charitably about others without complaining. Janet graduated from DeVilbiss High School in Toledo Ohio and earned her Bachelors in Education from University of Toledo where she met Ed, a Navy veteran and student of engineering. While at UT, she was a member of Alpha Omicron Pi and, to Ed’s delight her beautiful image graced the pages of many area and campus newspapers. Amidst a growing field of suitors and a full dance card, he proposed to Janet at a college dance in 1949, and clenched the deal when they were married on March 28, 1951. Janet taught kindergarten in Toledo for the next three years before dedicating herself to homemaking and raising the children. She was best known for her love of music and lovely solo voice, using this gift in church choirs, leading the children's choir at St. John's Lutheran church and having fun with her voice in the Sweet Adeline choral group in Adrian, Michigan. Janet volunteered faithfully for her church as treasurer, and in the local hospital. She was passionate about taking care of her husband and family, music (singing) and helping others. Janet also enjoyed serving as a member and president of the Adrian (MI) garden club and was an avid Bridge player. Though always poised, her funny bone could be tickled setting off a delightful, unrestrained laughter. A small memorial service officiated by the Rev. Dr. Matthew Floding will be held for Janet in the Memory Support Center at Brecon Village, 101 Brecon Drive, Saline Michigan on Saturday, June 24 at 3:30 p.m. Donations can be made in Janet’s honor to Compassion International at https://www.compassion.com/charitable-gift-catalog.htm. To sign Janet’s Memorial Guestbook, or to encourage the family with your thoughts and memories, please visit www.rbfhsaline.com.

The family of Janet Eileen Gannaway created this Life Tributes page to make it easy to share your memories.

Send flowers to the Gannaway family.