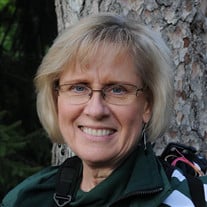 Janice Elizabeth Hansen, Ph.D. On the evening of October 6, 2019, at the Saline Evangelical Home, Janice Elizabeth (Rutt) Hansen of Ann Arbor, MI, quietly slipped the bonds of the cancer she had fought valiantly for four years, entering the... View Obituary & Service Information

The family of Janice Elizabeth Hansen created this Life Tributes page to make it easy to share your memories.

Send flowers to the Hansen family.