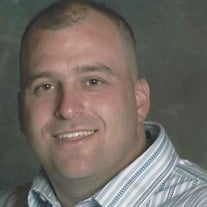 John Vannuck Ashby—loving husband, father, son, brother, uncle, officer, and friend—passed away on Friday, February 28, 2020, at the age of 48, after a courageous battle with cancer. John was born on May 6, 1971 in Lansing, MI, to John and Heidi (Vannuck) Ashby. He grew up in East Lansing among his large extended family of siblings, grandparents, aunts and uncles, and cousins. He enjoyed summers in Grayling, MI, where he spent his senior year and graduated from Grayling High School in 1989. In 1990, he met Valarie Burton in Ann Arbor, and they married in 1993. Their union brought them three children: Caleb, Caitlin, and Jonah. For the past 16 years, they raised their children in Saline, MI, where they attended Keystone Church. John enlisted in the US Army in 1992. He was stationed at the 40th Engineer Battalion in Baumholder, Germany, until 1996. John served as an officer (corporal) and detective for the Sumpter Township Police Department for more than 20 years. He became the department’s first DARE officer, and he was well respected for his fairness and empathy. See the Sumpter PD announcement at https://www.facebook.com/sumpterpolice/ . John was also the proud co-owner and president of a successful private investigation business, which he founded in 2012. John was always known for both his tremendous sense of humor and the unfailing helpfulness and support provided to his family, friends, neighbors, and communities. For his entire life, he had an amazing ability to make others laugh, no matter the situation. He never hesitated to step up and help anyone in need, in any way that he could. John was a very solid and comforting presence in his family, which he led with abounding laughter and playfulness, security and compassion, and common sense and faith in God—all encompassed by love. He most enjoyed time spent with his wife, children, and other family, and was known for his fine photography; his coaching youth sports, including being head coach of 7th and 8th grade football at Saline Middle School; and managing his daughter’s music band. John is survived by Valarie Ashby, his wife of over 26 years; their children, Caleb Ashby, Caitlin Ashby, and Jonah Ashby; his parents, John Ashby and Heidi Rogge; stepfather Denis Rogge; his sister, Stacey (Steve) Kimbrell, and brother, Jake (Carolyn) Ashby; his grandmothers, Colleen Vannuck and Lovella Ashby; four nephews; two nieces; and a multitude of treasured aunts, uncles, cousins, and in-laws. John was preceded in death by his grandfathers, John Ashby and Allen Vannuck. A Memorial service will be held on Saturday, March 7, 2020, at 11:00 A.M. at Keystone Church in Saline. Visitation for friends and family will be held before the service from 10:00 A.M. until the time of service at 11:00 A.M. Memorial contributions in his name may be made to the Sarcoma Foundation of America. You may donate at www.curesarcoma.org. To sign John’s guestbook, to leave a memory, or for more information and directions, please visit www.rbfhsaline.com.

The family of John V. Ashby created this Life Tributes page to make it easy to share your memories.

Send flowers to the Ashby family.