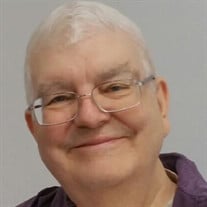 On Saturday, March 2, 2019 John Louis Gland died peacefully in his home in Saline, following a long struggle with cancer. John was born to Louis and Opal Gland in Valparaiso, Indiana and grew up in the northern Indiana town of Chesterton, near the southern coast of Lake Michigan. As a boy, John worked on his grandparents’ farm and enjoyed helping his grandmother sell eggs in Chicago. In high school John worked part-time at a gas station pumping gas and changing oil but soon realized he had a great aptitude for and interest in chemistry. After graduating from high school, he enrolled in Wittenberg University in Springfield, Ohio as a chemistry major. During the summers John worked as a Union Ironworker with his Uncle Bill Gland. John attended graduate school at the University of California-Berkeley Chemistry Department and did research under the tutelage of Professor Gabor Somorjai, earning his Ph.D. for seminal research into fundamental reaction chemistries on platinum surfaces. After graduation, Dr. Gland led research and development groups at General Motors and Exxon Research before becoming a full professor at the University of Michigan, with appointments in Chemistry, Applied Physics, and Chemical Engineering departments. Professor Gland studied the fundamentals of chemical reactions on surfaces using custom-designed and built ultra-high vacuum instrumentation. He was an esteemed mentor to a diverse cadre of high school, undergraduate, and graduate students, with more than 20 Ph.D. and post-doctoral associates taking leadership positions in business, industry, and academia. Professor Gland also had a well known sense of humor, even when confronted with student pranksters turning every book and file in his office backwards. John Gland enjoyed a wide range of activities apart from professional life, including a life-long love of eclectic music genres, historic carousels, and science fiction literature. He was an excellent fly fisher with a skillful casting arm and an intuitive ability to read water. John fished fine waters all over country with his wife, children, and friends. He was especially fond of southeastern Alaska where he was made an honorary member of the Tlingit Indian Tribe. John was highly intelligent and had many accomplishments. Remarkably, he was also humble, kind, generous, loyal, and fun. He was a good man. John is survived by his wife, brother, children, grandchildren, family, friends, and colleagues. A memorial service will be held Saturday, March 9, 2019 from 2:00 P.M. to 5:00 P.M. at the Robison-Bahnmiller Funeral Home, 301 East Michigan Ave, Saline, MI 48176. An informal celebration and a time for sharing will be followed by a reception for all in attendance. Donations in John’s name to the Saline District Library at 555 N. Maple Rd in Saline are encouraged and envelopes will be available at the funeral home. To leave a memory, to sign his guestbook, or for directions please visit www.rbfhsaline.com.

On Saturday, March 2, 2019 John Louis Gland died peacefully in his home in Saline, following a long struggle with cancer. John was born to Louis and Opal Gland in Valparaiso, Indiana and grew up in the northern Indiana town of Chesterton,... View Obituary & Service Information

The family of John L. Gland created this Life Tributes page to make it easy to share your memories.

Send flowers to the Gland family.