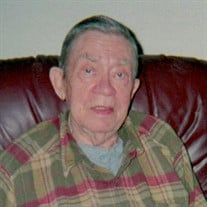 Age 86, passed away on Thursday, September 29, 2016 at his home. John was born on October 31, 1929 in Battle Creek, MI the son of John and Lucile (Lohman) Jaeger. On June 16, 1950 at the St. Paul Evangelical and Reformed Church in Saline, MI, he married Marilyn Grace Schaefer and she preceded him in death on June 1, 2014. John proudly served in the United States Coast Guard during WWII, and also served in the United States Army in Korea during the Korean War. He went on to work at the G.M. Hydra-Matic Plant as a Tool and Die Maker, retiring in 1984. After retirement he and Marilyn moved to Lake LeAnn in the Irish Hills where he loved to read and go on pontoon rides with his family. He also liked to coach Little League and Babe Ruth League baseball. Survivors include their children Karen Linebaugh, Karl (Catherine) Jaeger, Janice (David) Harrison, and Michael (Kristin) Jaeger. Other survivors include his grandchildren Kurt and Kevin (Jessica) Jaeger, Christopher and Benjamin Harrison, one great-grandchild Jordan Jaeger, and his sister-in-law Jorun Jaeger. In addition to his wife John was preceded in death by his brother Don H. Jaeger and son-in-law Jon Linebaugh. Funeral Services will take place on Tuesday, October 4, 2016 at 11:30 A.M. at St. Paul United Church of Christ in Saline, MI, with Rev. Dr. David Bucholtz officiating. Burial will follow the service at Washtenong Memorial Park in Ann Arbor, MI at 1:15 P.M. In lieu of flowers memorial contributions in John’s name may be made to a charity of one’s choice. Envelopes will be available at the church where friends may begin calling on Tuesday, October 4, 2016 from 10:00 A.M. until the time of service at 11:30 A.M. To leave a memory, to sign John’s guestbook, or for more information or directions please visit www.rbfhsaline.com.

The family of John C. Jaeger created this Life Tributes page to make it easy to share your memories.

Send flowers to the Jaeger family.