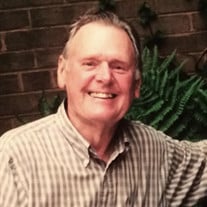 John Ewald Lutz, 88, of Vancouver, WA died Sunday, February 28, 2016 at home surrounded by his family. John was a beloved husband, father, grandfather, brother, friend, professor, mentor, biologist, musician, artist, gardener, community volunteer, and patriot. A celebration of his life will be held April 16, 2016 at 2:30 pm at Touchmark in Vancouver, WA. John was born on September 16, 1927 in Benton Harbor, Michigan to Harold and Evelyn Lutz. He grew up in Hamden, Connecticut. He loved working many summers alongside Uncle Art and cousin Bill at the Lutz family farm on Macon Road in Saline, Michigan. He rooted for Michigan against Ohio, and never missed “The Game” between Yale and Harvard. His first paid job was singing soprano for $13 a month in a boy’s choir. He lugged a tuba in a cloth bag on his bike to school for a year until he switched to the trumpet inspired by his admiration of Harry James’ music. John sang in the men’s glee club at Yale and made spending money singing and playing guitar with his friends at college parties. He loved performing in Gilbert and Sullivan musicals and entertained friends and family harmonizing in his deep bass voice with friends and family. John was proud to enlist in the Army medical corps in WWII and had the honor of drawing blood from General Pershing. He served at Walter Reed Hospital and Pratt General Hospital (previously the Miami Biltmore). In 1950, John graduated from Yale and in 1951 he married his college sweetheart, Ann McKinney. After graduation, he whisked her off to Kodiak, Alaska where they lived in a tent while he was studying the Kodiak brown bear and was the biology manager for the Kodiak Wildlife Refuge. His love of Alaska, Native American culture and the rugged outdoorsman life lasted throughout his life. In 1964, John was awarded his PhD in Biology at the University of Michigan. He taught at the University of Michigan, Eastern Michigan and was a beloved and entertaining professor and chair of the biology department at Beloit College in Wisconsin. His summers were often spent teaching classes at state parks and continuing education for teachers. His research on cell regeneration in the 1970’s helped lay the groundwork for future success in the field of regeneration. He was responsible for many college students going on to medical and nursing school, biology PhD programs, research programs and park management. One of the biggest joys in his life was the friendships he made with his students. John was a master gardener and spent hours creating and cultivating his gardens. He and Ann together created gorgeous, welcoming and interesting gardens at all of their homes. It brought him great happiness that his vegetable gardens fed the neighborhood and less, the deer and raccoons. If he had not become a college professor he would have loved to have been a farmer. Starting with his first 784 sq. ft. home in Saline, John began his hobby of building additions, outbuildings, decks and ponds. His home in Redmond, WA was a showcase of both vegetable and landscaped gardens. He helped his children make home improvements well into his 80’s. He was lucky to travel the globe in his retirement and enjoyed the wonderment of other countries, people and their cultures. His travels enriched his understanding of the world and made for a great conversationalist. Moving to Vancouver in 2013 to a retirement community meant John could enjoy the camaraderie of breakfast with new friends, spearheading trivia contests and Great Courses geology talks, and yet another garden to grow. He was grateful to have their support in his last months. John is survived by his wife, Ann, of 64 years, his daughter Kathy (Dennis) Garvey of Beaverton, OR, son David (Barb) of Woodinville, WA, son Tucker (Dawn) of Portland, OR, daughter Karen (Don) Hallacy of Marietta GA. and grandchildren Michael, Brian (Marianna) and Megan Garvey, Tucker and Will Lutz, Christopher, Andrew and Nikki Hallacy, sister Lauralee Lutz of Chelsea, MI, cousin Ruth Lutz Broesamle of Grass Lake and her son John Broesamle of Saline and cousins Ed and Doug Ewald. What his family and friends will miss most will be John’s wisdom, integrity, quick wit, smart mind, his love of music, his incessant curiosity, his non-judgmental acceptance and his generous soul. Every community he was a part of benefited from his volunteer spirit, his sense of fun and his work to leave it a better place. We will miss his love of life, his support and his example to strive to be the best we can be.

The family of John Ewald Lutz created this Life Tributes page to make it easy to share your memories.

Send flowers to the Lutz family.