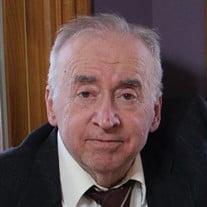 Gilbert, Jon Brown Saline, MI Age 77, passed away at his home on Wednesday, May 6, 2015. He was born on November 20, 1937 in Houston, (Harris Co.) Texas, the son of Benjamin Almon and Anabel Cecil (Brown) Gilbert. He graduated with a degree in Civil Engineering from the University of Houston and was employed with the FAA for over 30 years. He loved Michigan, often calling it "God's Country" and considered himself a hybrid Michigander because his mother was born on the Upper Peninsula and his father was born in the Lower Peninsula. He was a gentle soul with a jovial spirit who enjoyed gardening and spending time with his family. He is survived by his wife of 51 years, Sarah Florence (Churchill) Gilbert, whom he married on April 4, 1964 at the South Park Methodist Church in Houston, Texas. In addition to his wife, other survivors include his children, Florence Catherine (Kenneth John) Kasper, Jon Brown Gilbert, Jr. and Charles Churchill (Jamie Lynn nee: Leathers) Gilbert, nine grandchildren and his brothers, Earl M. Gilbert, Ben R. Gilbert and James A. Gilbert. He was preceded in death by his parents and his brother, Robert C. Gilbert. Visitation will be held on Monday, May 11, 2015 from 1:00 P.M. until the time of the service at 3:00 P.M. at the First United Methodist Church 1200 N. Ann Arbor St., Saline, MI with Rev. Dr. James E. Tuttle, officiating. Burial will take place privately at the Riverside Cemetery in Hastings (Barry Co.), MI. Memorial contributions may be made to the United Methodist Camp Scholarship for Developmentally Challenged Persons and envelopes will be available at the church. Please make checks out to the First United Methodist Church Saline. To sign Jon’s guestbook, to leave a memory, or for more information or directions please visit www.rbfhsaline.com.

Gilbert, Jon Brown Saline, MI Age 77, passed away at his home on Wednesday, May 6, 2015. He was born on November 20, 1937 in Houston, (Harris Co.) Texas, the son of Benjamin Almon and Anabel Cecil (Brown) Gilbert. He graduated with a degree... View Obituary & Service Information

The family of Jon Brown Gilbert created this Life Tributes page to make it easy to share your memories.

Send flowers to the Gilbert family.