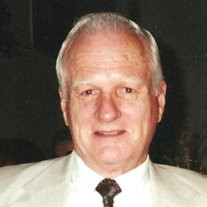 Joseph C. Marx, a Saline resident for over 38 years, died Tuesday, October 1, 2013, at the Arbor Hospice Residence in Ann Arbor. Joe was born on April 15, 1930 in Kansas City, MO, the son of Joseph and Edna (Gangel) Marx, both deceased. Joe and his wife, Rosemond, have been members of the St. Andrew the Apostle Catholic Church in Saline for over 38 years. Joe enlisted in the U.S. Army after graduation from Shawnee Mission High School in 1947. He was with the 23rd Infantry Division, U.S. Army Reserves until 1951, and spent that year in the Korean War (The Forgotten War). He came home in July of 1951 as a decorated Korean War Veteran with honorable discharge. Joe spent many years in sales, beginning with Phillips Petroleum of Bartlesville, OK. Joe’s work with Phillips took he and his family from Oklahoma to Illinois and then to Michigan in 1968, where he remained. Later, Joe went on to join Hoover Universal (now Johnson Controls) in 1975. He retired in 1992 from the Blow Molding division of Johnson Controls (Uniloy) in Manchester, Michigan. His job in international sales allowed him to travel the world and meet many friends along the way. During his lifetime, Joe played professional baseball and had a passion for many competitive sports. He also enjoyed coaching and mentoring in the communities and schools in Oklahoma, Illinois, and Michigan. Joe loved golf, the outdoors, gardening, and a lively game of Pinochle or Bridge. He was a 50 year member of both the Knights of Columbus and the American Legion. Survivors include his loving wife Rosemond (McGraw) of 61 years, five children; Janine (David) Winters of Okemos, MI, Joyce (Thomas Quasarano) Marx of Lansing, MI, Jeryl (David) Hall of Gregory, MI, Joseph A. (Elizabeth) Marx of Holland, MI, and John M. (Lorri) Marx of TX. Other survivors include nine grandchildren and four great-grandchildren, who enjoyed spending time with Grandpa on his tractor and in his garden. Joe was preceded in death by his sister Edna Garrett of Shawnee, KS, and brother John Marx of Raleigh, NC. He is survived by sister Rose Marie Murray of AZ, brother Gerald Marx of CO, brother James Marx of CA, sister Judy Morris of MO, brother Richard Marx of KS, sister Connie Marx of TX, sister Sandy Woodridge of TX, and sister Dolores Collett of TX. Joe’s family has wonderful memories and will miss him dearly. A Mass of the Christian Burial will take place on Monday, October 7, 2013 at 11:00 A.M. at the St. Andrew the Apostle Catholic Church in Saline, MI, with Fr. Francis Mossholder, celebrant. In lieu of flowers memorial contributions may be made to the church, to Arbor Hospice, to the American Cancer Fund, or to a charity of one’s choice. Envelopes will be available at the church. Friends may begin calling on Monday, October 7, 2013 at the church from 10:00 A.M. until the time of the Mass at 11:00 A.M. Arrangements entrusted to the Robison-Bahnmiller Funeral Home of Saline, MI. To sign Joe’s guestbook, to leave a memory, or for more information or directions please visit www.rbfhsaline.com.

The family of Joseph C. Marx created this Life Tributes page to make it easy to share your memories.

Send flowers to the Marx family.