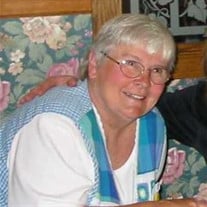 Judith L. Little passed away peacefully on November 17, 2020 and was joyfully reunited with her brothers David and Harvey along with their parents Harvey and Ona Lantz. She was 89 years old and is survived by her five daughters, Deborah, Catherine, Colleen, Karen and Jennifer. In addition, she has ten grandchildren and nine great-grandchildren. Judy was born in Ames, Iowa on Oct. 13, 1931. Judy grew up with a love of music, passed on from her mother who played the organ in her local church until she died. At the age of six, she was already considered a child prodigy on the piano and made recordings of classical music. Gifted with perfect pitch, she spent her life playing piano for her children, community, church and many others. Even in her sleep, Judy would often continue practicing, her fingers rapidly playing out songs while she dreamt. She was known to have young people gather around her piano to sing Christmas Carols every holiday season and her greatest pride was her five daughters, instilling a love of music in all of them. Judy graduated from Ames High School, Class of 1949. Following graduation, she attended Iowa State University where she earned her degree in Dietetics and Nutrition. In 1978, she received her Doctorate in Family Studies from Michigan State University. Judy was a professor at Eastern University and Western University in Michigan, as well as at the University of Arkansas, in Arkansas. A long-time member of PEO (a philanthropic education organization supporting women’s education) for over 65 years, Judy gave tirelessly of her time in Iowa, Virginia and Michigan. She was a life-long advocate for women and their education, helping identify women for scholarships and grants and hosting fund-raising events. She was also an active member of the Presbyterian Church in Michigan and Virginia. In 2001, after 9/11, she helped coordinate and lead a concert with both organizations to raise money for firefighters and first responders; playing piano for a local children’s church choir and her daughter. Her friends and family found Judy funny and quick-witted and lovingly referred to her as “sassy”. She was known for playing pranks on grandchildren and spent hours allowing them to bury her in toys and cardboard blocks. She loved to sew and made each daughter a Christmas tree skirt, which still adorns their home every holiday season. Judy was never without a dog in her life. Her constant companion, Cody, could often be found sleeping on her lap. She also was known to rescue kittens from dumpsters and streets, resulting in the menagerie that populated and filled her home with love. The family wishes to thank everyone at Evangelical’s Nursing Home-Saline for their loving care of Judy. In remembrance, those who wish to can donate in Judy’s name to either of the following charities, respecting her love of music and animals: Humane Society of Huron Valley or Artist Relief Tree

Judith L. Little passed away peacefully on November 17, 2020 and was joyfully reunited with her brothers David and Harvey along with their parents Harvey and Ona Lantz. She was 89 years old and is survived by her five daughters, Deborah, Catherine,... View Obituary & Service Information

The family of Judith L. Little created this Life Tributes page to make it easy to share your memories.

Send flowers to the Little family.