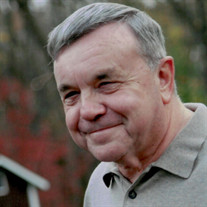 Larry Tucker, age 76, passed away after a brief illness on Sunday, December 10, 2017 surrounded by his family. Born September 11, 1941, Larry was a devoted family man, always putting the needs and wants of his family before his own. In 1963 he married his high school sweetheart, Bette (Feldkamp) Tucker, and over the next 54 years they built a wonderful life together. Larry was a very hard working man and proud of the over 40 years he spent as a machine builder at Uniloy/Johnson Controls/Milacron. He will be remembered as a patient, kind, and loving husband, father and grandfather. We will miss his goofy smiles and sayings, his laidback demeanor, and his gentle heart. His legacy lives on in those who love him. Larry is survived by his loving wife Bette Tucker; beloved children, Stacey (Steve) Brown, Trisha (David) Raft, Kristi (Don) Lupi and special grandchildren, Brittney 23, Alyssa 21, Brandon 19, Jordan 17, Makenna 13, Adelyn 8, and Delaney 6. He is also survived by his brother Ron (Janet), sister Joanne (Jerry), brother-in-law Ray (Janet), brother-in-law Duane (Bev) and 8 nieces and nephews. He is preceded in death by his parents Lawrence and June Tucker, and niece Tonya Tucker. Funeral services will be held at St. John’s Lutheran Church in Bridgewater, MI on Friday, December 15, 2017 at 11:00 A.M. Pastor Drexel Morton to officiate. A graveside service will immediately follow at the St. John’s Church Cemetery. Family will receive friends at the Robison-Bahnmiller Funeral Home in Saline, MI on Thursday, December 14, 2017 from 4:00 P.M. until 8:00 P.M. and again at the church on Friday from 10:00 A.M. until the time of service at 11:00 A.M. In lieu of flowers memorial contributions may be made to St. John’s Lutheran Church and envelopes will be available at the funeral home. To sign his guestbook, to leave a memory you have of him, or for more information please visit www.rbfhsaline.com.

Larry Tucker, age 76, passed away after a brief illness on Sunday, December 10, 2017 surrounded by his family. Born September 11, 1941, Larry was a devoted family man, always putting the needs and wants of his family before his own. In 1963... View Obituary & Service Information

The family of Larry Jordan Tucker created this Life Tributes page to make it easy to share your memories.

Larry Tucker, age 76, passed away after a brief illness on Sunday,...

Send flowers to the Tucker family.