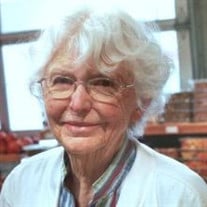 Lois Seidel Entrekin died May 16, 2018 in the care of Arbor Hospice in Saline, MI, at the age of 93. The daughter of George and Maude Seidel, she was born and raised in Rochester, NY. Lois pursued voice and cello in her high school years. She was selected to play in the Inter-High Symphony Orchestra which performed in the 1940 New York World’s Fair. Following graduation from East High School in 1942, she was recruited by the FBI for her exemplary shorthand and typing skills, and a surprise elevator encounter with FBI Director J. Edgar Hoover topped her list of memorable moments at that time. In 1945, Lois enlisted in the military, serving as a medical stenographer in the X-Ray Department of the U.S. Naval Hospital in Bainbridge, MD. She was granted honorable discharge on Aug. 22, 1946. After returning to her hometown, she met the dashing youth director of Third Presbyterian Church in Rochester. Lois and Rev. H. Burton Entrekin were wed on Oct. 16, 1948, raised four children, and lived the majority of their 62 years together in Medina, NY. Lois was devoted to her family as a stay-at-home mother. She did, however, assume some part-time employment which included writing headlines for the Medina Journal-Register, secretarial duties for First Baptist Church, FMC, and a 15-year position as clerk at the Lee Whedon Memorial Library. Her family remembers Lois as a feisty, spirited woman who never shied away from a good argument and was willing to consider opposing views (though fairly often rejected them). Lois loved to write about her past, usually in a humorous vein. Her typewriter keys were hot to the touch after crafting long, detailed letters to her friends and family. An excellent seamstress, Lois made many of her young children’s clothes. If time did not permit, a new birthday nightgown might be unwrapped with pins still holding the hem in place. Within the confines of her home, Lois was free with German expressions which are better left untranslated. When given the opportunity, she was an animated and engaging storyteller, as well as the subject of true yet unbelievable tales told by her family. She was known to be an outstanding whistler, sometimes accompanying the production of the perfect flaky pie crust. In addition to baking delectable desserts, Lois was a “health nut,” bringing to the family table such food as peanut butter meatballs, alfalfa sprouts, home-brewed root beer, octopus, and our preferred frozen chocolate covered bananas. Last but not least, many a lucky cat strolled into Lois’s life. She gave all of them abundant love and midwifery when needed. Lois was predeceased by her husband, H. Burton Entrekin; her son, Glenn Entrekin; her brother, G. Robert Seidel. She is survived by her daughters, Heather Entrekin (Peter Stover), Hollie (Charlie) Pettit, and Heidi (Mark) Goodhart; grandsons, Nathan Pettit (Melissa Woo), Daniel Pettit, Brian (Amanda) Pettit, Matthew Goodhart, and Scott (Barb) Goodhart; great-granddaughters, Quinn and Macy Pettit; and one great-grandson on the way. At a future date, a private family reunion will be held in Lois’s memory at Chautauqua Institute where she had arranged several joyful family gatherings. Thank you to Robison-Bahnmiller Funeral Home in Saline, MI for handling arrangements.

Lois Seidel Entrekin died May 16, 2018 in the care of Arbor Hospice in Saline, MI, at the age of 93. The daughter of George and Maude Seidel, she was born and raised in Rochester, NY. Lois pursued voice and cello in her high school years. She... View Obituary & Service Information

The family of Lois May Entrekin created this Life Tributes page to make it easy to share your memories.

Send flowers to the Entrekin family.