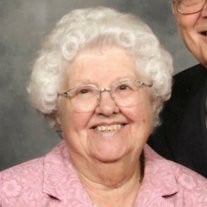 Age 91, passed away on Friday, December 13, 2013. Lois was a resident of Brecon Village in Saline. She was born on August 1, 1922 in Bridgewater, MI, to Erwin and Florence (Schaible) Klager. She graduated from Saline High School in 1940. She married Leon Feldkamp on February 10, 1945 at St. John Lutheran Church in Bridgewater, MI. He preceded her in death in 2012. They were married for 67 years. Lois lived her whole life in the Bridgewater/Saline area. She and her husband farmed in Lodi Township for a number of years. She worked at Goodyear’s in Ann Arbor for five years before and five years after her marriage. She later worked at the Ford Plant in Saline in the cafeteria. She was a very active member of the Bethel United Church of Christ in Freedom Township, MI. She and Leon were also Farm Bureau members for many years. She especially enjoyed watching her grandchildren’s sporting events. Survivors include children: Marcia (Joseph) Cromas of Northville, Martin Feldkamp of Evanston, IL, and Keith Feldkamp of Saline and six grandchildren: Jared and Casey Cromas, Heather, Andrew, and Brian Feldkamp and Megan (Blake) Jackson. Although Lois had no siblings she was very close to her husband’s family. Survivors include sisters-in-law Sylvia Kalmbach and Marian Allmand, both residents of Brecon, and many nieces and nephews. She was preceded in death by brothers and sisters-in-law Willard and Arleen Feldkamp, Albert and Ellen Easudes, Elmer Kalmbach and Charles Allmand. Cremation has taken place and burial will take place at a later date. A Memorial Service will be held on Tuesday, December 17, 2013 at 11:00 A.M. at the Bethel United Church of Christ in Freedom Township, MI, with Rev. David Bucholtz officiating. Memorial contributions may be made to the church. Envelopes will be available at the Robison-Bahnmiller Funeral Home in Saline where friends may begin calling on Monday, December 16, 2013 between the hours of 3:00 P.M. and 8:00 P.M. and at the church on Tuesday, December 17, 2013 from 10:00 A.M. until the time of service at 11:00 A.M. To sign Lois’ guestbook, to leave a memory, or for more information or directions please visit www.rbfhsaline.com.

Age 91, passed away on Friday, December 13, 2013. Lois was a resident of Brecon Village in Saline. She was born on August 1, 1922 in Bridgewater, MI, to Erwin and Florence (Schaible) Klager. She graduated from Saline High School in 1940. She... View Obituary & Service Information

The family of Lois Feldkamp created this Life Tributes page to make it easy to share your memories.