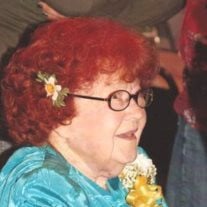 Klumpp, Maggie L. Scio Township, MI Maggie Lucille (Miller) Klumpp, passed away on Sunday, April 6, 2014 at the Meadowview Assisted Living Facility. Maggie was born in Paulding, Ohio on May 24, 1912. Her mother was Hattie Lilly Ducharme and her father was William Curtiss Miller. Maggie married Clarence Jason Klumpp on November 19, 1933 and Clarence preceded her in death on January 19, 1991. Maggie worked hard all of her life beginning when her father and mother were divorced and she was only 12 years old. She was away from both of her parents, staying in homes with strangers working for a place to live. She did a lot of hard work in the fields helping to farm the ground and driving the huge workhorses. She worked at putting the corn in corn shocks and rounding up the cows at night from the fields. After Maggie and Clarence were married they moved to the Saline Valley Farms; Saline, Michigan which was a co-operative community. Clarence was the main farmer at that time. Maggie also worked there in the butchering of the chickens. Preparing them for delivery and worked in the cannery. In later years Maggie worked for the Universal Die Casting factory in Saline and she retired from there in 1977. Ever since her husband died, her daughters stayed at night twice a week. After she was in the hospital in 2013 her daughters stayed every night with her. She was still canning up until she was a 96 year old. She has always burned wood for heating her house and still maintains the woodstove herself by putting in the big chunks of wood. Maggie has always had a lot of knowledge to tell everyone and all have learned a lot from her wisdom. Survivors include daughters Jean Margaret (the late James) England, Marion Lucille (the late Harold) Hogan and her half-brother Earl Miller. She is also survived by seven grandchildren: Gary (Cecilia) England, David England, Cheryl England, Brian (Diane) England, Dennis (Rama) Hogan, Darell Hogan, and Denise (Gregory) Michailuk. In addition she is survived by nineteen great-grandchildren: Cassandra England, Jason England, Chiffon England, Rebekah England, Bryan England, Melodie Wiseman, Harmony Wiseman, Daniel Wiseman, Danielle Wiseman, Ricky Wiseman, Nathanael England, Alex Angel, Matthew Hogan, Nicole Hogan, Marissa Hogan, Bradley Hogan, Derek Michailuk, Alex Michailuk, and Michelle Michailuk. She is also survived by eleven great-great-grandchildren: Mereyah Wiseman, Ronald Jones, Serenity Wiseman, Bobby England, Jordan Mathausch, DaChaundra Harmon, Caitlynn Harmon, DiMon Anderson, Floyd Anderson, Kellie Anderson, Ezra England, and many nieces and nephews. Maggie was preceded in death by her brother Arthur Miller, her sister Violet Hadley, and her half-brother Austin Miller. Funeral Services will take place on Friday, April 11, 2014 promptly at 1:00 P.M. at the Robison-Bahnmiller Funeral Home in Saline, MI, with Pastor Bobby Toler officiating. Burial will follow in the Lodi Township Cemetery in Lodi Township, MI. In lieu of flowers memorial contributions may be made to the North Sharon Baptist Church 17999 Washburn Road Grass Lake Charter Township, MI 49240. Envelopes will be available at the funeral home where friends may begin calling on Wednesday, April 9, 2014 from 5:00 P.M. to 8:00 P.M. and Thursday, April 10, 2014 from 5:00 P.M. to 8:00 P.M. and on Friday, April 11, 2014 from 12:00 Noon until the time of service at 1:00 P.M. To sign Maggie’s guestbook, to leave a memory or for more information or directions please visit www.rbfhsaline.com.

The family of Maggie L. Klumpp created this Life Tributes page to make it easy to share your memories.

Send flowers to the Klumpp family.