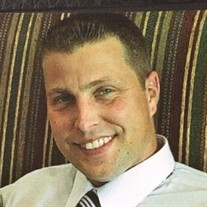 Age 38, passed away on Wednesday, May 10, 2017. Marcus was born in Bellevue, Washington the son of Dennis and Martha (Stephenson) Williams. Marcus enjoyed his 14 years of service at D&R Heating and Cooling in Pinckney where he developed family like relationships with his customers and coworkers including Wendy and Tom Heider. Marcus had a close and loving relationship with his 3 children Henry, Noelle and Easton He had a child like imagination that he enjoyed sharing with them. He had a close relationship with all his family and considered his brother Matt to be his best friend. He had fond memories of his childhood growing up in California and family trips to Pinecrest. His final resting place will be at Salem Lutheran Church where he is a member. Gone too soon, he will be greatly missed by so many. Marcus is survived by his children Henry Parker (10) Noelle Jane (9) and Easton Charles (4), former wife and friend Rachelle Skelly-Richards, and parents Dennis and Martha. He is also survived by his brother Matthew Richards, Grandmother Joan Richards, bonus mom Gail Richards, bonus dad Woody Williams, half-brother Nicholas Richards, sister-in-law Liz Richards, bonus brother Jason Williams, bonus brother and sister-in-law Marcus and Nichole Williams, nieces Peyton and Wyatt Richards, and bonus nephew Lido Williams. Additionally is he survived by his mother-in-law Kathy Skelly, brother-in-law and sister-in-law Renae and Neal McConnell and Ryan and Linsey Skelly, nieces Reese and Chloe McConnell, nieces Isabel, Eilan Skelly and nephew Manessah Skelly. Marcus was preceded in death by his father-in-law Ron Skelly, Grandfather Elmer Richards, and Grandparents Robert and Dorothy Stephenson. Funeral Services will take place on Wednesday, May 17, 2017 at 11:00 A.M. at the Salem Evangelical Lutheran Church in Scio Twp. with Pastor Michael Koepke officiating. Burial will take place in the Salem Lutheran Church Cemetery at a later date. In lieu of flowers contributions may be made to his children's college funds, care of Rachelle Skelly-Richards. Contributions can be mailed to 43317 Pepperwood Canton, MI 48187 or online at https://www.gofundme.com/richards-children-fund. Envelopes will be available at the church where friends may join the family for visitation starting on Tuesday, May 16, 2017 from 5:00 P.M. to 8:00 P.M. and again on Wednesday from 10:00 A.M. until the time of the service at 11:00 A.M. To sign Marcus’ guestbook, to leave a memory, or for more information or directions please visit www.rbfhsaline.com.

Age 38, passed away on Wednesday, May 10, 2017. Marcus was born in Bellevue, Washington the son of Dennis and Martha (Stephenson) Williams. Marcus enjoyed his 14 years of service at D&R Heating and Cooling in Pinckney where he developed family... View Obituary & Service Information

The family of Marcus Jay Richards created this Life Tributes page to make it easy to share your memories.

Send flowers to the Richards family.