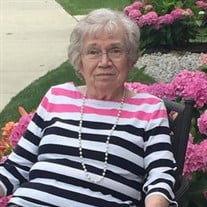 Margaret Caroline Paffel (known as Peggy) age 88, passed away peacefully on Wednesday, August 12, 2020 at Linden Square Assisted Living in Saline, MI from Alzheimer’s disease. She was born in Detroit on May 31, 1932 to William and Romelda Keveney. The family moved to Wayne, MI in the late 1930s. Peggy finished elementary school at St. Mary in Wayne and graduated in 1949 from Wayne High School. October 18, 1953 Peggy married the late James Paffel at St. Mary Church. They lived in Wayne, Westland, Grass Lake, and Flushing, MI before Peggy moved to Saline in 2012. She is survived by her son Jack (Eliza) of Houston, TX, daughter Jody (Kevin) Roberts of Ann Arbor, MI, eight grandchildren and eight great-grandchildren. Peggy was preceded in death by her husband Jim, her son Jim, and her brothers Reverend William Keveney and Robert Keveney. Peggy loved her family and was a wonderful daughter, loving wife, sister, mother, aunt, grandmother, and a dear friend to all who knew her. She will always be remembered for her great sense of humor, talent for crafting, making miniatures, and working crossword and jigsaw puzzles. The family would like to extend a special thank you to the staff at Linden Square Assisted Living LLC for the beautiful world they made for Peggy while she resided there for six years, and to Careline Hospice for their care and support. Cremation has taken place. There is no funeral planned but when the time is right, a Paffelpalooza Patio Party will be scheduled to honor Pretty Peggy Paffel. In lieu of donations, please “pay it forward” by doing something kind. To leave a memory you have of Peggy, to sign her guestbook or for more information please visit www.rbfhsaline.com.

Margaret Caroline Paffel (known as Peggy) age 88, passed away peacefully on Wednesday, August 12, 2020 at Linden Square Assisted Living in Saline, MI from Alzheimer&#8217;s disease. She was born in Detroit on May 31, 1932 to William and Romelda... View Obituary & Service Information

The family of Margaret Caroline Paffel created this Life Tributes page to make it easy to share your memories.

Send flowers to the Paffel family.