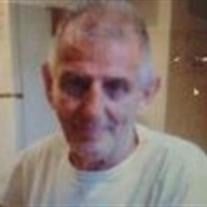 Mario Donald Kelly, or better known as “Butch” by those closest to him, age 72, passed away peacefully with those who loved him at his side at Saint Joseph Mercy Hospital on Wednesday, March 14, 2012. He died from complications of being a life-time smoker. Butch was born on August 21, 1939 in the Chicago area. He had a wit and a sense of humor about him that just charmed everyone he met. Though he never touched a drop of alcohol, he would love to ask for a martini or a beer when we would go to the local Coney Island or even at the doctor’s office when the nurse asked him if he needed anything. He never married or had any children but was well loved by many to the point he had “adopted” grandchildren. He went to Saint Gregory where he ended his education in 1955. As a dedicated employee, he worked in numerous restaurants such as Denny’s and Big Boy’s as a dishwasher or busboy. He lived in many places throughout Ann Arbor before he finally settled down in Saline approximately 20 years ago. He lived on his own and loved his daily walks to visit his friends from Busch’s grocery store, the Smoke Shop, Dollar General and the ladies at the Bank. Butch was predeceased by his mother Jeanette Santeler and his sister Shirley (Robert) Gorse, all of Saline. He will always be remembered by his “adopted” friend/daughter Theresa (Kevin) Redfern, his “adopted” grandchildren Andrea, Katie, Eric, Becky and his four cats Muzak, Puff, Pumpkin and Penny who were his children. A Vigil Prayer Service will be held on Wednesday, March 21, 2012 at the Robison-Bahnmiller Funeral Home, 301 East Michigan Avenue in Saline, at 7:00 P.M. with Rev. Fr. David Rosenberg, Celebrant. As requested by Mario, please do not dress up or feel the need to wear dark colors for he never was that way himself. In lieu of flowers, memorial funds have been established in his name for the Saline Area Social Services. Envelopes will be available at the funeral home where friends may begin calling on Wednesday, March 21, 2012 from 4:00 P.M. until the time of the Vigil Prayer Service at 7:00 P.M. To leave a memory or for more information please visit www.rbfhsaline.com.

Mario Donald Kelly, or better known as “Butch” by those closest to him, age 72, passed away peacefully with those who loved him at his side at Saint Joseph Mercy Hospital on Wednesday, March 14, 2012. He died from complications of being a life-time... View Obituary & Service Information

The family of Mario D. Kelly created this Life Tributes page to make it easy to share your memories.

Mario Donald Kelly, or better known as “Butch” by those closest...

Send flowers to the Kelly family.