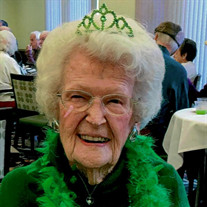 Seyfried, Marion (Lindbert) peacefully passed away on October 27, 2018 at the age of 101. She was born March 17, 1917, in Royal Oak, Michigan to Clarence and Edna (Rauchenberger) Lindbert. At an early age, the family moved to Manchester, Michigan where she grew up and graduated from Manchester High School in 1935. Marion graduated from Michigan State Normal College (Eastern Michigan University). She went on to teach elementary school for several years. While in college, she met Frederick J. Seyfried and they married in Manchester June 14, 1942. They were married 67 years until his death. After his return from World War II (U.S. Navy), he joined the family business of Seyfried Jewelers where she frequently worked. Fred managed the Ypsilanti store, and they lived in Ypsilanti for many years. They were members of the Congregational Church where she was active in their Guild. She also volunteered in the Ypsilanti Thrift Shop, Beyer Hospital and with the March of Dimes. In 1957, they purchased a summer home on Winans Lake and joined the Lakelands Golf and Country Club, where they loved to golf. Their home was on the east side of Winans Lake. She thought each sunset was 'the most beautiful' sunset. She was a good bridge player and loved to play often with her friends. After Fred's retirement, they purchased a condominium in Bradenton, Florida and joined the Bradenton Country Club, where they continued to enjoy golf and bridge. They were Snowbirds for years and eventually settled in Florida. Frederick preceded her in death in 2009, at which time she moved back to Michigan and into Brecon Village in Saline. She loved her time at Brecon Village and made many friends there. Besides playing bridge and golf, Marion loved friends, family, flowers, fresh fruit and dessert! She was preceded in death by her daughter, Nancy Lynn Seyfried (1966) and her husband and best friend, Frederick J. Seyfried (2009). She is survived by Dr. Barbara Seyfried and Susan (Gregory) Brown. Cremation has taken place. A Memorial Service celebrating her life will be in the Auditorium at Brecon Village on Saturday, November 17, 2018 at 1:00 P.M. The family will receive friends one hour before the service. The family asks that contributions in her memory be made to the Salvation Army in Ann Arbor or another charity of your choice and envelopes will be available at the service. To leave a memory you have of Marion or to sign her guestbook please visit www.rbfhsaline.com

Seyfried, Marion (Lindbert) peacefully passed away on October 27, 2018 at the age of 101. She was born March 17, 1917, in Royal Oak, Michigan to Clarence and Edna (Rauchenberger) Lindbert. At an early age, the family moved to Manchester, Michigan... View Obituary & Service Information

The family of Marion L. Seyfried created this Life Tributes page to make it easy to share your memories.

Send flowers to the Seyfried family.