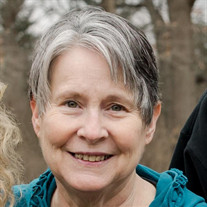 Mary Kathryn (White) Sheredy Hubel Mary Hubel passed away on Thursday, July 29, 2021 at the age of 67. After beating the odds and surviving multiple cancers over the past 28 years, her spirit is finally free from the body that held her back. Mary was born on August 31, 1953, in Clare, Michigan; daughter of the late Joe and Leona (Prout) White. She was one of eight siblings. Mary attended St. Henry’s Catholic school and graduated from Clare High School, where she was a cheerleader. Mary married Michael Sheredy in 1970. She and Michael had two daughters, Deana Belle and Jennifer Ann. Mary and her daughters moved from Clare to Ann Arbor in 1975. She married Terry Hubel in 1981 and they had a son, Kyle T. Mary moved back to Michigan in 2012 to be near family. Mary worked at the University of Michigan, Population Studies Center, then as a legal secretary for Whitaker and Benz law firm. Mary opened and ran an in-home, licensed day care for several years after the birth of her son, Kyle, in 1983. She spent the majority of her career working at City Hall of Ann Arbor as an administrative assistant to Judges George Alexander and Timothy P. Connors. Mary continued to work for the City of Ann Arbor until she was diagnosed with a malignant brain tumor in 1992. Mary was preceded in death by her parents, brother, Michael White, nephews Michael Fred Zinser and Cody Zinser, and great nephew Riley White, all of Clare, Michigan. Mary is survived by: daughters Deana Barrett of Ypsilanti; Jennifer (Chris) Taylor of Ypsilanti; and son, Kyle T. (Brittany) Hubel of Dexter, MI. Mary had six grandchildren: Quinn, Vivian, and Lola Barrett; Cameron Taylor and Logan and Madison Hubel. In addition Mary is survived by siblings: Carol (Dick) Crawford; Judy (Dexter) Hubel; Margaret (Jim) Zinser; Barbara (Steve) Blystone; John (Kris) White; Linda DeWitt (Darryl), and Sister-in-law Sharon White (Mike). Mary is survived by many nieces, nephews, and great-nieces and nephews. Mary played on a women’s softball league in Ann Arbor for many years during the late 1970’s and early 1980’s. She spent many summers traveling the states with J-Bar-J Rodeo Company, where she made numerous friends and had countless adventures. Mary had a great sense of humor, and loved playing cards and board games. She was known for her spunk and she loved dancing and singing along to classic rock. One thing heard over and over through the years was how much people enjoyed her tenacity and spirit. A celebration of life gathering will be held at a family residence in August.

Mary Kathryn (White) Sheredy Hubel Mary Hubel passed away on Thursday, July 29, 2021 at the age of 67. After beating the odds and surviving multiple cancers over the past 28 years, her spirit is finally free from the body that held her back.... View Obituary & Service Information

The family of Mary Kathryn Hubel created this Life Tributes page to make it easy to share your memories.

Send flowers to the Hubel family.