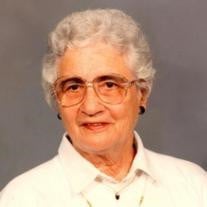 Schlecht, Mary Virginia (Meyers) Ann Arbor, Michigan Age 90, passed away Monday, March 12, 2012 at St. Joseph Mercy Hospital after a brief illness. Mary was born November 10, 1921, in Fort Worth, Texas the daughter of Robert O. and Clara M. (Schneider) Meyers. On January 17, 1943 she married her beloved “Sam” in the chapel of the Michigan League. She attended Ann Arbor High and Ypsilanti Normal (Eastern Michigan). She taught at Angel Nursery School. She has been a member of Bethlehem United Church of Christ since she and Sam married and was a member of the Hand bell choir. Mary retired from the City of Ann Arbor after 30 years of employment. After retirement, she and Sam spent summers at their cottage on Drummond Island and enjoyed the annual visits of family and friends but most of all their grandchildren. She was a member of the American Legion Erwin Prieskorn Post 46 Women’s Auxiliary where she served as President, Vice President, Treasurer and Secretary and other capacities at various times. She was a Brownie and Girl Scout troop leader. She formed the Depression Kids lunch group. She and Sam loved to travel and enjoyed trips to Europe, Australia, Fiji, New Zealand, Tahiti, Hawaii, Mexico, and Canada and around the good old USA. She loved playing cards and she and Sam were in several card clubs. She and Sam enjoyed square dancing and were members of the Buttons and Bows Square Dance club. She was a member of the Roy Hoyer Juniors on Parade Dance Troupe and danced in reviews from 1935 – 1940 meeting the likes of Greta Garbo, Ed Wynn, Mae West and other luminaries of the time. One of the high lights of her life was her 12th birthday when she was given a ticket, by her mother, to see the pianist the Great Paderewski perform. Mary Schlecht- the mother, the grandmother, the great-grandma Gin and “Aunt Mary” will be surly missed by her family and all who had the pleasure of knowing her. She is survived by her daughter Sandra (Richard) Kerr of Libertyville, IL; Grandson R. Todd Kerr of Peoria, IL, Granddaughter Kristina (Christopher) Kobus of Muskego, WI; Two great- granddaughters Kelsey Lee and Makayla Ainsley Kobus of Muskego, WI; Brother-in-law Walker Lang of Ann Arbor; Nephew John (Paula) Leavey of Interlochen, MI, Two nieces Alison (Mike Kaslik) Lang of Ann Arbor and Stephanie Lang of Ann Arbor; several great nieces and nephews. Mary was preceded in death by her loving husband Stanley (Sam), her mother and father, two sisters Patricia (Walker) Lang, Bobbie (Bob) Leavey, Brother-in-law Robert Leavey; Nephew Tony (Sylvia) Lang. A memorial service will be held on Friday, March 30, 2012 at 2:00 p.m. in the Chapel of Bethlehem United Church of Christ; 423 S. Fourth Ave.; Ann Arbor, Michigan, with Rev. Martha Brunell, officiating. Cremation has taken place and interment will take place at Bethlehem Cemetery, Ann Arbor at a later date. Mary’s family invites you to join them after the service in the church social hall for coffee. If desired memorial contributions could be made in Mary’s name to Pancreatic Cancer Research, Adrenal Cancer Research, UM Comprehensive Cancer Center, 1500 East Medical Center Drive, CCGC 6-303 Ann Arbor, MI 48109-0944 or your favorite charity. To sign Mary’s guestbook or to leave a memory, or for more information or directions please visit www.rbfhsaline.com. Arrangements entrusted to the Robison-Bahnmiller Funeral Home, Saline.

The family of Mary Virginia Schlecht created this Life Tributes page to make it easy to share your memories.

Send flowers to the Schlecht family.