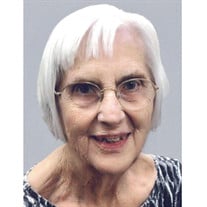 Maxine Grace Burkhart, 94, of LaGrange, IN, died at 5:00 P.M., on Friday, April 9, 2021 at Miller's Merry Manor in LaGrange, IN. She was born on February 18, 1927, in Manchester, MI, to Edward and Linda (Klager) Burmeister. On June 8, 1946 in Bridgewater, MI she married Russell Burkhart; he preceded her in death on April 15, 2012. Survivors include her son, Mark (Denise) Burkhart of Boise, ID; twin daughters, Jean (Jeff) Farmwald of Half Moon Bay, CA, Joan (Ray) Bontrager of Shipshewana; six grandchildren, eleven great-grandchildren, eight great-great-grandchildren; three sisters, Joyce (David) Hoeft of Manchester, MI, Carol Burmeister of Saline, MI, Gail (Jim) Knight of Sault Ste. Marie, MI, and many nieces and nephews. She was preceded in death by her husband, parents, son, Richard Burkhart and sister Alice Burmeister. Maxine was born and raised in Saline, MI. She was the school secretary for Jensen and Houghten Elementary Schools until 1972, when she and Russell moved to Shipshewana. After moving to Shipshewana, she worked at Spectors Dry Goods store until 2007, when she retired on her 80th birthday. Maxine attended Shipshewana United Methodist Church and Marion Christian Fellowship. Visitation will be from 4:00 P.M. to 6:00 P.M. on Tuesday, April 13, 2021 at Miller-Stewart Funeral Home, 1003 South Main Street, Middlebury. There will also be visitation from 12:00 P.M. to 1:30 P.M. on Wednesday, April 14, 2021 at the Robison-Bahnmiller Funeral Home, 301 East Michigan Avenue, Saline, MI followed by a 1:30 P.M. graveside service at Oakwood Cemetery, Saline, MI. Services will be conducted by Pastors Randy and Larissa Moore-Willard. Memorials may be given to the donor’s choice hospital, in care of the Neonatal Intensive Care Unit (NICU). Online condolences may be offered at rbfhsaline.com.

The family of Maxine Grace Burkhart created this Life Tributes page to make it easy to share your memories.

Send flowers to the Burkhart family.