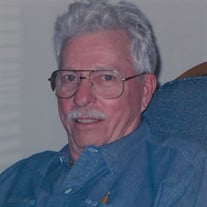 Age 86, passed away at his home on Monday, October 27, 2014. He was born on July 8, 1928 in Ann Arbor, MI, the son of Mahlon and Emily (Higgins) Ellis. On July 5, 1947 in the First Presbyterian Church in Ypsilanti, MI, he married Virginia Hinsch, and she survives. Mel and Ginny loved their dog Emma and camping at their property on US-2 in the upper peninsula. Mel worked at Ford Ypsilanti Plant as Area B Maintenance Superintendent and retired after 42 years. Survivors in addition to his wife Virginia include their children; Deb (Bob) Grimmette, Mark (Elayne) Ellis, Cindy (Mike) Bunton, and Marcia (John) Evans. Other survivors include their grandchildren; Jennifer (Jason), Jessica, Sarah, Katie (James), Parker, and Macy, Great-Grandchildren; Xander and Tatum, his brother Duane Ellis, his sister Trudy Bohms, his brother-in-law Herman Deal, and sisters-in-law Dorothy Ellis and Els Ellis. He was preceded in death by his parents, his In-laws Rolland and Gertrude Hinsch, his sister Helen Deal, brothers Mahlon Ellis Jr. and Edward Ellis, a brother-in-law Floyd Bohms and a sister-in-law LaDona Ellis. The family would like to give a special thanks to his caretakers; Lilly, Twyla, Sharon, and Audrey. Funeral Services will take place on Thursday, October 30, 2014 at 11:00 A.M. at the Robison-Bahnmiller Funeral Home in Saline, with Chaplain Dave McNeil officiating. Private burial will follow in the Lodi Township Cemetery in Lodi Twp., MI. In lieu of flowers, memorial contributions may be made to the American Cancer Foundation or to Humane Society of Huron Valley. Envelopes will be available at the funeral home where friends may begin calling on Wednesday, October 29, 2014 between the hours of 6:00 P.M. to 8:00 P.M. and on Thursday, October 30, 2014 from 10:00 A.M. until the time of service at 11:00 A.M. To leave a memory, to sign his guestbook, or for more information or directions please visit www.rbfhsaline.com.

The family of Melville F. Ellis created this Life Tributes page to make it easy to share your memories.

Send flowers to the Ellis family.