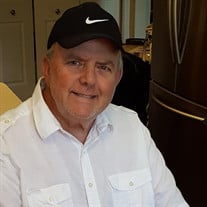 Michael (Mike) Dew, 68, of Saline, Michigan passed away peacefully on Tuesday, June 2, 2021 after a fifteen year battle with Parkinson’s disease. Mike was born on August 23, 1952, in Johnstown, PA to the late Robert and Mary Louise (Micklos) Dew. Mike was married to Elaine (Meredith) Dew on October 8, 1983. Mike is survived by his wife Elaine, his sons Ian and Sean, his brothers and sisters-in-law Robin Dew, Leo T. Meredith, Nadine and Ron Klebba, Dana Osburn, Charles and Christine Meredith, Dennis Meredith, Douglas Meredith, multiple nieces and nephews, and his faithful canine companion, Brady Dew. As an infant, Mike moved with his parents to Monroe, MI where he graduated from Monroe Catholic Central High School class of 1970. He then attended the University of Michigan, where he graduated with a degree in Political Science. Upon graduation he worked as a security guard and later a carrier for the U. S. Postal Service in Ann Arbor. After 20 years of service, he retired due to the limitations of his disease. A lover of bad jokes, Mike had a great sense of humor which he often shared with family and friends. He was a loyal fan of Michigan sports, especially the football team. He also enjoyed attending his sons’ sporting events, golf, playing euchre with friends, vacationing at Disney World, gardening, and spoiling his boys. Along with his parents, he was preceded in death by his younger brothers, Mark and Jeffrey Dew, in-laws Leo A. and Dorothy Meredith, and sister-in-law Colleen Osburn. The family will receive friends on Sunday, June 6, 2021 from 2:00 P.M. until 6:00 P.M. at the Robison-Bahnmiller Funeral Home in Saline. A rosary service will be offered at 5:30 P.M. Funeral Mass will take place on Monday, June 7, 2021 at 10:30 A.M. at St. Andrew the Apostle Catholic Church, 910 Austin Rd., Saline, MI with a visitation from 9:30 A.M. until the time of Mass. Memorial donations in Michael’s name can be made to the Michigan Parkinson Foundation and envelopes will be available at the funeral home and church. To sign Mike’s guestbook, to leave a memory, or for more information or directions, please visit www.rbfhsaline.com.

Michael (Mike) Dew, 68, of Saline, Michigan passed away peacefully on Tuesday, June 2, 2021 after a fifteen year battle with Parkinson&#8217;s disease. Mike was born on August 23, 1952, in Johnstown, PA to the late Robert and Mary Louise (Micklos)... View Obituary & Service Information

The family of Michael J. Dew created this Life Tributes page to make it easy to share your memories.

Send flowers to the Dew family.