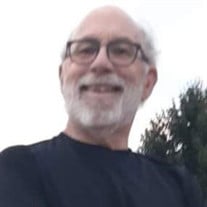 Michael James Huizenga, 70 of Manchester, Michigan passed away peacefully on Saturday, September 14, 2019 at his home with his family by his side. Mike was born October 13, 1948 in Ann Arbor, Michigan to the late Francis Huizenga and Heidy (Wiedman) Huizenga. On June 14, 1969 he married Georgia “Ann” McCue, and she survives along with their children John (Cathy) Huizenga and their children and grandchildren, James Huizenga and daughter, Erika Huizenga (Chad Higgins) and their children. He is also survived by siblings Sharon Huizenga (Pat Cleary), Ted (Sandy) Huizenga, Dora (Jeff) Rautiola, and many nieces and nephews. He was preceded in death by his parents. Mike celebrated his 50th anniversary with the International Brotherhood of Electrical Workers in October of 2018. He was a Master Electrician and chairman of the Ann Arbor Joint Electrical Training Committee for some time and then continued to be a member of the committee where he received an award for his years of service. Mike joined Utilities Instrumentation Service in 1982 and worked there until he retired. Mike was also a property owner along with David Wheeler. Together they owned 306 North River Street in Ypsilanti (H&W Properties) where UIS was housed from 1984 until 2013. He also was field superintendant on the electrical construction of the original St. Joseph Mercy Hospital on Huron River Drive near Ypsilanti. Mike and Ann lived in Saline for 24 years before they purchased land and built their home on 13+ acres in Bridgewater Township in 1994. Mike became a “farmer” and loved tinkering with his tractors, lawn mowers, hay cutting equipment, trucks, Gator, golf cart, and Corvette. He was also good at construction and built 2 barns, horse stalls, a chicken coup, and created electrical fencing pastures for 2 horses. He took pride in all that he did and it showed; as an electrician, husband, father, and grandfather (papa). He set a wonderful example for all those that came to know him. Mike fought courageously against heart problems since 2011 and most recently was diagnosed with terminal leukemia 16 months ago. He was given one year to live, but he continued to fight and was able to join his wife in a 50th wedding anniversary celebration given by their children. He loved his family, grandchildren, and great-grandchildren. They were a source of joy and they loved to play and tease each other. He had a jovial personality, but he was also a great source of strength and knowledge. Though he will be greatly missed, his memories will last forever. The family will receive friends on Wednesday, September 18, 2019 from 4:00 P.M. to 7:00 P.M. at the Robison-Bahnmiller Funeral Home in Saline, 301 E. Michigan Ave., and on Thursday, September 19, 2019 from 10:00 A.M. until the time of service at 12:00 Noon. Rev. Tom McCue and Pastor Michelene Sample officiating. Burial will take place following the service and will be held in Washtenong Memorial Park, 3771 Whitmore Lake Road, Ann Arbor, MI. In lieu of flowers, memorial contributions may be made to: Gift and Records Administration, 3003 South State Street, Ste #8000 Ann Arbor, MI 48109. Memo Line: Rogel Cancer Center. To leave a memory you have of Mike, to sign his guestbook, to leave a memory, or for directions please visit www.rbfhsaline.com.

Michael James Huizenga, 70 of Manchester, Michigan passed away peacefully on Saturday, September 14, 2019 at his home with his family by his side. Mike was born October 13, 1948 in Ann Arbor, Michigan to the late Francis Huizenga and Heidy (Wiedman)... View Obituary & Service Information

The family of Michael James Huizenga created this Life Tributes page to make it easy to share your memories.

Send flowers to the Huizenga family.