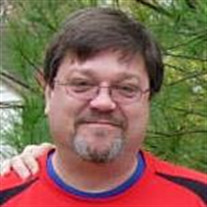 Michael Dean Melchi, husband, father, grandfather, brother and dear friend, passed away peacefully in his home on January 16th, 2017. Mike will be remembered for his gentle nature, patience, kindness and generosity-gifts he was willing to share with everyone he met-all things passed down to him by his mother. Mike enjoyed golf, music, fishing and the Detroit Tigers-all things passed down to him by his father. Mike is proof that we all must learn and pass on the important lessons of life from our parents. Mike was born October 30th, 1958 in Lansing, MI, son of the late Max and Martha (Winslow) Melchi. Mike graduated from Herbert Henry Dow High School in Midland, MI in 1976, and received a computer science degree from Central Michigan University. Mike married his high school sweetheart, Julie Townsend, in 1983. They were drawn together by a love for theater and music, and enjoyed performing together with their friends in many plays over the years. Mike and Julie moved their family to Shorewood, IL where he started his professional career at Tel-Labs in suburban Chicago. Wanting to be closer to his family, Mike took a job at Xycom in Saline, MI in 1990 and remained in Michigan for the rest of his life. Mike was employed at Thompson Reuters in Ann Arbor at the time of his passing, where he was a valued and respected software engineer. Mike was an avid golfer, and organized his company golf league and family golf outings for many years. He was the glue that held many people together. Mike’s wife Julie passed away in 1995 after 13 years of marriage. They raised three beautiful and successful daughters, Jeannette, Tana and Pamela. His girls were the most important thing in his life, and they are blessed to have him as a father. Mike is survived by his mother, Martha (Winslow) Melchi of Midland, three daughters Jeannette McCoy, Tana (David) Mankus and Pamela (partner Melody Rosa) Melchi, all of Jacksonville, FL. He has four siblings, Mona (Mark) Leeder, of Wyoming, MI, Mary (Perry) Clark of Commerce Township, MI, Mark (Jennifer Townsend) Melchi of Ann Arbor, MI, and Martin Melchi of Chicago. Mother and father in-law Patricia and Lloyd Townsend of Midland, brothers and sisters-in-law: Steve and Susan Townsend of Parma, MI, Sheri and Gary Rokos of Spring Lake, MI, Pamela and Gary Shaffer of Peoria, AZ, Greg and Colleen Townsend of Klute, TX, Chris Townsend of Colorado Springs and Jennifer and Mark Melchi of Ann Arbor, MI. Mike has 6 grandchildren: Samantha, Maddison, Braxton, Julia, Drake and Chase and many nieces and nephews: Ryan, Andrea, Chrystie, Aaron, Austin, Jacob, Nicholas, Caroline, Matt, Jeana, Jason, Travis and Aaron. He was preceded in death by his grandparents Polly and Dale Caseman, Harold and Viola Melchi, his wife Julie, and his father, Max. Memorial services for Mike will take place at 2 pm, Friday, January 27, 2017 at Robison-Bahnmiller Funeral Home at 301 East Michigan Avenue in Saline, MI. Deacon Perry Clark officiating. Family will receive friends at the funeral home beginning Friday, January 27, 2017 at 12:00 pm until the time of the service. Following the service all are welcome to join the family for a luncheon and celebration of Mike’s life at the American Legion Hall at 320 West Michigan Avenue in Saline. Those planning an expression of sympathy are asked to consider a donation to Ann Arbor Meals on Wheels, as Mike was an active supporter of this cause and knew the importance of helping those in need.

Michael Dean Melchi, husband, father, grandfather, brother and dear friend, passed away peacefully in his home on January 16th, 2017. Mike will be remembered for his gentle nature, patience, kindness and generosity-gifts he was willing to share... View Obituary & Service Information

The family of Michael Dean Melchi created this Life Tributes page to make it easy to share your memories.

Send flowers to the Melchi family.