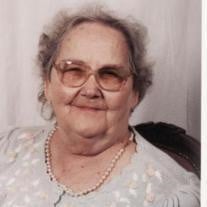 Age 93, passed away on Thursday, May 3, 2012 at her home. She was born on March 27, 1919, in Catlin, IL, the daughter of Elmer T. and Hazel M. (Hogg) Shaw. On August 22, 1936 in Whitmore Lake, MI, she married Charles W. Marken Jr. and he preceded her in death on April 25, 1997. Mildred had been employed at Universal Die cast for over 35 years until her retirement. Survivors include three children; Katherine (Claude) Shepard of Lake Havasu City, AZ, Charles (Linda) Marken III of Chelsea, MI, and Vicki L. (Thomas) Marken-Horn of Saline, MI. Other survivors include 10 grandchildren, 22 great-grandchildren, 31 great-great-grandchildren, a sister-in-law Pauline Shaw, two special nephews Ed and Greg, and many other nieces and nephews. Mildred was preceded in death in addition to her husband by her parents, four brothers; James, Lee, Freddie, and Albert Shaw, one sister Dorothy Shaw, one daughter Charleen Marken-Kaul, two grandsons; David Lincoln, and Joseph Kaul, and one great-grandson Charles Reeves. A Memorial Service will take place on Wednesday, May 9, 2012, at 11:30 A.M. at the Keystone Church in Saline, with Pastor Ken Gilmore, officiating. Memorial contributions may be made to the family. Envelopes will be available at the Church where friends may begin calling on Wednesday, May 9, 2012, from 10:30 A.M. until time of service at 11:30 A.M. Arrangements entrusted to the Robison-Bahnmiller Funeral Home of Saline.

The family of Mildred L. Marken created this Life Tributes page to make it easy to share your memories.

Send flowers to the Marken family.