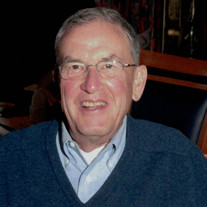 Age 82, passed away on Wednesday, June 24, 2015 at the St. Joseph Mercy Hospital. Milo was born May 17, 1933, in Detroit, Michigan the son of Milo R. White, Sr. and Dorothy (Gardner) White. In 1993, he married Sandy Perrett and she survives. He is also survived by his three children, Peter (Alyssa) White of New York City, by Michael White of Ann Arbor, and by Kimberly (Sid) Moorin of Clinton Township. Other survivors include three step-children, Todd (Lisa) Perrett of Kalamazoo, Kristen (Mark) Shuert of Hamburg, and Stephanie (Phillip) Eads of Grenada, MS. He is also survived by seven grandchildren, Leah, Carly, Morgan, Taylor, Lauren, Annie and Stephen, his brother and sister-in-law, Daniel and Donna White of Rochester Hills, Michigan, his sister-in-law and brother-in-law, Karen and Tom Wininger of Grosse Pointe, Michigan and by several nieces and nephews. He attended the Detroit Public Schools and graduated from The Mercersburg Academy, in Mercersburg, PA. Milo graduated from Dartmouth College in 1955 with a Bachelor of Arts degree in History. Milo served in the United States Army from 1955 to 1958. He earned a Master’s Degree in History from the University of Michigan in 1959. Milo taught one year at Kalamazoo Central High School before returning to Ann Arbor in 1960. He later earned a Ph.D. degree in Education from the University of Michigan in 1970. Milo spent the next 27 years at Pioneer High School as a teacher and as Chairman of the Social Studies Department, as Assistant Principal and then 13 years as Principal of Pioneer High School. He was one of the originators of the highly successful and acclaimed Humanities program. After two years at the Balas Building, Milo returned to his first love – teaching. He then taught Social Studies and served as Chairman of the Social Studies Department at Huron High School until his retirement from full-time teaching in 1998. During this time, he was a John Jay Fellow in the Humanities and was selected to attend a NDEA Institute in Far Eastern Studies at Michigan State University. Milo continued as a substitute teacher at both Huron and Pioneer High Schools until June 2007, when he retired completely from teaching. Milo and Sandy enjoyed traveling. Their favorite vacation spots included North Carolina, Hilton Head Island, Bayfield, Ontario, Canada and Glen Arbor, Michigan. They also enjoyed several cruises including Alaska, Italy, the Panama Canal, the Caribbean Islands, to the Maritime Provinces of Canada and also to Ireland and Italy. Milo was a member of the Ann Arbor Rotary Club and was an active member of St. Andrew’s Episcopal Church in Ann Arbor and later at Holy Faith Church in Saline. Milo was an avid sports fan (particularly Michigan football as a long time season ticket holder) and Tiger baseball. He loved to read history, biographies and medieval mysteries, traveling, walking, collecting stamps (US and German), doing crosswords, and trying to solve math problems. He enjoyed walking his favorite dogs (Cassidy, Monty and Spidey), and was always appreciative of the joy and happiness that Sandy, the children and grandchildren brought to his life. A Memorial Service will take place on Saturday, June 27, 2015 at 2:00 P.M. at the Holy Faith Church in Saline with Rev. Stanley Eckermann and Rev. Donald Dersnah officiating. The family requests that any contributions be given to the Holy Faith Church Memorial Fund or to the Rotary Club of Ann Arbor Endowment Fund in memory of Milo R. White, Jr. Envelopes will be available at the church where friends may begin calling at 1:00 P.M. until the time of service at 2:00 P.M. Arrangements entrusted to the Robison-Bahnmiller Funeral Home in Saline. To sign Milo’s guestbook, to leave a memory, or for more information or directions please visit www.rbfhsaline.com.

The family of Milo Ritter White Jr. created this Life Tributes page to make it easy to share your memories.

Send flowers to the White family.