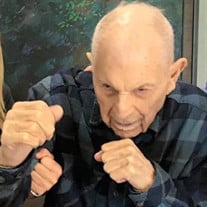 Norman Walter Bowers passed away on Sunday, August 16th, 2020. Born in Flint, MI in 1917, Norman had enjoyed a full life and never missed an opportunity to entertain. Though he never boxed, he is pictured demonstrating the left-handed form that won him the nickname, “Kid Bowers”, and if he wasn't clowning around shadow boxing, he was singing a tune while trying to get the ladies to dance with him. His true passion though, was playing the violin. Once he warmed up, he would play for hours. Norm started violin in Junior High School and played the “fiddle” while his father called the local square dances in Flint, Michigan. Norman had been planning a career with the Flint Symphony Orchestra when his Dad told him to put the violin back in its case and took him to work at the Buick Plant. He stayed with Buick from 1936 through 1974, and attained a Machinist classification through retirement. Once retired, Norman and his family moved from Flint to live on Sage Lake near West Branch. He loved to fish, hunt, and watch the sunsets over the lake. But, he never stopped playing. He often played at churches throughout Michigan and also in Florida, where he spent his winters. Norm played locally for his neighbors at Brecon Village, The Oaks Adult Day Services in Ann Arbor, for his church at Holy Faith in Saline, at his 100th birthday party, at the local nursery, in the doctor's office, at the Chiropractor's Office, and where ever he had an audience. Legally blind in his later years, he played strictly by memory. He enjoyed Gospel Music, Elvis and Johnny Cash. However, Norm would quickly revert to those old square dance favorites from his youth. He liked being called “Stormin' Norman” and leaves us with lots of warm memories and stories to tell. He will be missed. To leave a memory you have of Norm, to sign his guestbook or for more information please visit www.rbfhsaline.com.

Norman Walter Bowers passed away on Sunday, August 16th, 2020. Born in Flint, MI in 1917, Norman had enjoyed a full life and never missed an opportunity to entertain. Though he never boxed, he is pictured demonstrating the left-handed form that... View Obituary & Service Information

The family of Norman W. Bowers created this Life Tributes page to make it easy to share your memories.

Send flowers to the Bowers family.