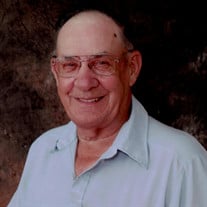 Norman Charles Kruger, 83 of Saline, MI passed away peacefully on Sunday, August 27, 2017 at the Brecon Village Memory Support Center with his family by his side, following a lengthy battle with Alzheimer’s Disease. He was born on January 14, 1934 to the late Charles and Loretta (Block) Kruger. He was a graduate of Saline High School in 1952. He served in the United States Army and was stationed in Germany. He received an Honorable Discharge in July of 1962. He was employed for 43 years starting at Steeb Dodge, which then became Saline Dodge and then became LaFontaine Dodge. He was also a member of St. John’s Lutheran Church in Bridgewater. Norman is survived by his daughter, Wendy (Stephen) Aho of Milan, his granddaughter Cassandra Aho of Milan, brother Clyde (Clema) Kruger of Ann Arbor, his sister Vernagene Schafer of Kalamazoo, his sister Irene Jedele of Saline, and his sister-in-law Shirley Kruger of Milan and many nieces, nephews and cousins. He was preceded in death by his parents, sister and brother-in-law Una and Emory Mulholland, brother Roy Kruger, brothers-in-law Clarence Schafer and LeRoy Jedele and nephew Larry Kruger. Funeral services will take place on Thursday, August 31, 2017 at 11:00 A.M. at the Robison-Bahnmiller Funeral Home in Saline with Pastor Drexel Morton officiating. Burial will follow at Oakwood Cemetery in Saline, MI. Military Honors will be held under the auspices of the Washtenaw County Veterans Honor Guard. Family will receive friends on Wednesday, August 30, 2017 at the funeral home, from 2:00 P.M. until 7:00 P.M. and on Thursday from 10:00 A.M. until the time of service at 11:00 A.M. Memorial contributions may be made to the Alzheimer’s Association or Arbor Hospice and envelopes will be available at the funeral home. To sign Norman’s guestbook, to leave a memory, or for more information or directions, please visit www.rbfhsaline.com.

Norman Charles Kruger, 83 of Saline, MI passed away peacefully on Sunday, August 27, 2017 at the Brecon Village Memory Support Center with his family by his side, following a lengthy battle with Alzheimer&#8217;s Disease. He was born on January... View Obituary & Service Information

The family of Norman Charles Kruger created this Life Tributes page to make it easy to share your memories.

Send flowers to the Kruger family.