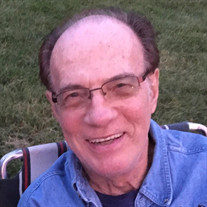 Norman Jay Livingston, 80, of Blackman Twp., Michigan passed away peacefully on October 20, 2018 with his family by his side. Norman was born May 20, 1938 to the late Noble Livingston and Ruthe Enna Kantzer. Norman is survived by his wife of 36 years Raquel Livingston; children, Steve Livingston of Dallas,TX, Ruth Hernandez of Dallas, TX, Kenneth (Louise) Livingston of Dallas, TX, Jeffrey Livingston of Colorado Springs, CO, Gregory (Sandy) Livingston of Litchfield, NH, Jorge (Alison) Livingston of Saline, MI; grandchildren David (Georgia) Livingston, Erica (Shane) Striegel, Jennifer (Kevin) Weber, Elizabeth Livingston, Brittany Livingston, Kaitlyn Livingston, Matthew Livingston, Shiloh Livingston; great grandchildren Layla, Lydia, Sammuel, Dash, Elijah, Kalilynn. He is also survived by siblings Robert (Jan) Livingston of Royal Oak, MI, and sister Janith Hopp of Romeo, MI, and many nieces, nephews and extended family. Norman was a loving father, husband, grandfather, and friend to everyone. Norman began his professional career in 1956 as a mail boy at the Detroit Chrysler Jet Engine Plant. There he worked his way up to a timekeeper at the Chrysler Missile Plant in Warren, MI where the Redstone, Saturn and Mercury rockets that helped launch the US into the space race were assembled. During this time, he attended Macomb Community College and Walsh College to study finance and accounting. In 1964 Norm transferred to the Chrysler Accounting Department at Cape Canaveral, FL where he prepared Chrysler Financial reports to NASA for the Saturn 1B program. Over the next eight years he would have a front seat to the triumphs and tragedies of our country’s space program, including the Apollo 11 moon landing. While in Florida, Norman was determined to further his career in finance and attended Brevard Community College (now Eastern Florida State College). In 1972 he returned to Michigan as an auditor on the Chrysler Corporate Audit Staff and eventually a Financial Analyst for Chrysler’s Defense Division. 1978 brought another move with Chrysler to El Paso, TX as Controller for the El Paso/Juarez Operations, overseeing the assembly plants in Juarez, Mexico for Chrysler’s Wiring Division. In El Paso Norm achieved an educational goal when he earned his Bachelor’s Degree in Business Administration from the University of Texas at El Paso. In 1990 he transferred to Chrysler’s Acustar headquarters in Troy, MI where he served as Business Manager for their Mexico Wiring Operations. Upon returning to Michigan, Norm achieved another educational milestone, earning his M.B.A. at Weber University. In 1994 Chrysler sold its wiring division to Yazaki of North America. Norm made the decision to retire from Chrysler and accept a position with Yazaki as Director of Sales Planning. His tenure at Yazaki North America took him around the world, where he fell in love with the many cultures, peoples, and experiences during his travels. In August of 2006, after an amazing 50 years of service in the automotive industry, Norman retired at the top of his game. Many of his colleagues and associates remember him as a fiercely loyal and hard working employee, manager and mentor. Most important, however, they remember his ability to maintain the balance of being dedicated to the job while always putting family first. Norman was very active in his retirement. His hobby was enjoying life to the fullest through his love of nature, photography, genealogical research, reading, writing, and experimenting in the kitchen. Norm’s love of animals resulted in many pampered pets, and he could often be found relaxing with a cat on his lap. An avid sports fan, he never missed a chance to cheer for the home team - whether it was his alma mater UTEP Miners, his childhood favorite Detroit Tigers, or his beloved Michigan Wolverines. Norman’s passion for laughter and camaraderie was evident to anyone who shared a visit, a meal, or even a simple conversation with him. He prided himself on maintaining his keen intellect and quick-witted sense of humor, which will be dearly missed by all who knew him. Norman is remembered for his boundless generosity and profound influence on the many lives he touched. A celebration of life will be held at a later date in Michigan. The family will communicate details as the arrangements are confirmed. Please direct all inquiries and communications to Jorge and Alison Livingston, 8594 Sleepy Hollow Dr, Saline, MI 48176 or [email protected] . Memorial donations may be made to the Michigan Humane Society, 30300 Telegraph Road, Suite 220, Bingham Farms, MI 48025.

Norman Jay Livingston, 80, of Blackman Twp., Michigan passed away peacefully on October 20, 2018 with his family by his side. Norman was born May 20, 1938 to the late Noble Livingston and Ruthe Enna Kantzer. Norman is survived by his wife of... View Obituary & Service Information

The family of Norman Jay Livingston created this Life Tributes page to make it easy to share your memories.

Send flowers to the Livingston family.