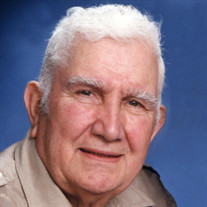 Oren passed away Friday, March 3, 2017 in McMinnville, Oregon at the age of 93 years. He was born November 27, 1923 in a house in the woods near Bitely, Michigan. He was the fifth of 13 children born to Edward and Mabel Gleason. Born with Scarlet Fever, he was passed to his Aunt Grace who was told to keep him warm and comfortable, because he was not supposed to make it. Oren lived in several places in Michigan as a child and young adult. He learned to farm with his family. He especially enjoyed working with cows and taking care of his black Morgan horse, Prince. He also learned to fly an airplane around this time. Oren worked as a mechanic and also test drove cars for Ford-Mercury. He met Jean Franklin in July of 1950 and two weeks later they were engaged! They married on February 17, 1951 in Saline Michigan. They had three children and were married 64 years until her passing in 2015. Oren continued farming and working multiple jobs which included the University of Michigan’s Aeronautical Research Center. While there he worked on the Ramjet engine. As the aerospace industry began gaining ground, they moved to Cocoa Beach, Florida where he worked for Boeing at Cape Canaveral. He was hired away from Boeing by Marquardt Corporation and moved to Reseda, California and then North Ogden, Utah. Oren had an innate understanding of ‘how things work’ and was able to trouble shoot problems quickly. Some of the projects he worked on were rockets that powered the Saturn 5 lift vehicle (Apollo Program), the F-4H fighter jet used in Vietnam, and the SR-71 Blackbird in conjunction with the Skunk Works. Some of these things his family learned about recently, as they were that top secret at the time. In 1967, Oren decided to leave the missile industry (too much politics!) and he and Jean moved the family to Oregon. They purchased 18 acres in the country outside of Sheridan and they built the house together. He worked as the Chief Electrician at Boise Cascade for 22 years before retiring in 1990. Oren enjoyed spending time with his family, gardening, watching movies and working in his carving and wood shops. Oren was a skilled wood worker making furniture, turning bowls and vases and carving many items such as whales, birds, rabbits, mice, wolves and an amazing collection of Santas. For a baby that was not expected to live, to a man of 93 years old, Oren truly had a life well lived. Oren is survived by three children: Elizabeth Kay (Steve), Steve (Holly), and Dave (Dorene). Five grandchildren: Sarah, Emerald, Brian, Miranda and Cora Jean; one great-granddaughter, Chloe, and his Scotty dog, HeatherLee. He was preceded in death by his parents, his wife Jean and all his siblings - Rex, Daisy, Ray, Cora, Pat, Mabel, Ellen, Peg, Harry, Max, Guy, and Elna. A service will be held at 10:00 a.m. on Saturday, March 11th at Macy & Son Funeral Home. Oren is being taken home to Saline, Michigan to be laid beside his beloved Jeanie. A graveside service will be held on Tuesday, March 14, 2017 at 11:00 A.M. in the Oakhill Cemetery in Saline Township with Pastor Tom Zimmerman officiating.

Oren passed away Friday, March 3, 2017 in McMinnville, Oregon at the age of 93 years. He was born November 27, 1923 in a house in the woods near Bitely, Michigan. He was the fifth of 13 children born to Edward and Mabel Gleason. Born with Scarlet... View Obituary & Service Information

The family of Oren Ernest Gleason created this Life Tributes page to make it easy to share your memories.

Send flowers to the Gleason family.