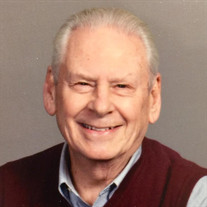 Paul Steven Ellis 75, of Saline, MI passed away peacefully, surrounded by family, on Thursday, November 7, 2019. Paul was born August 27, 1944 in Detroit, MI to the late Kingston and Helen (Tull) Ellis. On September 23, 1966 he married Mary Goralski and together they enjoyed 53 years of marriage. Paul is survived by his wife Mary, his children Curt (Monica) Ellis, Glenn (Linda) Ellis, grandchildren Caitlin, Grant, Brennan, Cullen and Jessica. Paul is also survived by brothers Dan (Marge), Dave (JoAnne) and John (Val) and sister Betsy (Kevin) as well as numerous nieces and nephews. Paul served in the United States Army and then began a 35 year career with Detroit Diesel. On August 26, 1995 Paul was ordained as a permanent deacon and he served St. Andrew the Apostle Catholic Church in that capacity until his death. In addition, Paul had served on the Board of Directors of Careers Through Faith since 2002. A viewing will be held at St. Andrew the Apostle Catholic Church on Monday, November 11, 2019 from 4:00 PM until 8:00 PM. A Mass of the Christian Burial will take place at St. Andrew on Tuesday, November 12, 2019 at 10:00 AM with viewing starting at 9:00 AM. In lieu of flowers, memorial contributions in his name may be made to the St. Louis Center or Arbor Hospice and envelopes will be available at the church. To leave a memory you have of Deacon Paul, to sign his guestbook, or for directions please visit www.rbfhsaline.com.

The family of Paul Steven Ellis created this Life Tributes page to make it easy to share your memories.