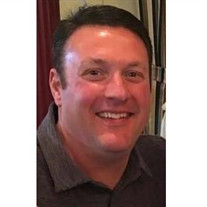 Age 50, passed away suddenly on Wednesday, January 10, 2018 while on a business trip in Orlando, FL. Paul was born on June 15, 1967 in Rochester, New York, the son of Paul Robert and Sharon (Hudson) Fox. He graduated from McQuaid Jesuit High School in 1985 in Rochester, NY. In 1986, Paul met the love of his life, Shelly Lucidi, at John Carroll University in Cleveland, Ohio. They married on May 14, 1994 in Pittsburgh, PA. After their marriage, Paul started his own general contracting company in Rochester, NY called Labrador Design. He later worked for Parksite, Inc. as a business development manager for 15 years. In 2010, he joined BASF where he served as a Performance Systems Development Manager working with the BASF construction portfolio. Throughout his successful career, Paul traveled extensively for work and developed a close relationship with his colleagues. Paul was a true a nature lover and jack-of-all-trades. He enjoyed playing soccer, hiking, fishing, kayaking, hunting, going to his local gun club, gourmet cooking, brewing beer, gardening, spending time with his dogs, doing home remodeling projects, and tinkering with his classic car. However, nothing was more important to Paul than spending time with Shelly and their boys. He loved watching his son Graham compete in crew and his twins play soccer. Paul was one of those exceptional individuals whose warm disposition and outgoing personality quickly turned strangers into friends and friends into family. The Fox family met many wonderful people throughout their journey, taking them from Cleveland, OH to Rochester, NY, Raleigh, NC, Tolland, CT, and Saline, MI. Paul will be sadly missed by his wife Shelly; sons Graham, Nolan and Quinn; father Paul Robert (Mary Anne) Fox of Pittsford, NY; sister Michelle (James) Marasco of Spencerport, NY; uncle, Rich Hudson of Orlando, FL; niece Jacquelyn; nephews Jeremy and Trent; and several cousins. He is also survived by his mother-in-law Gen (William) Payne of Pittsburgh, PA; and brother-in-law Donald (Mary) Lucidi also of Pittsburgh. He was preceded in death by his beloved mother, Sharon Fox, his grandparents, and several uncles. A Celebration of Life Service will be held on Friday, January 26, 2018 at First United Methodist Church in Saline, MI. Visitation will take place at 1:00 p.m., followed by the service at 2:00 p.m. In lieu of flowers, memorial contributions may be made to the Fox children's educational fund, payable to "Michele Fox" and sent c/o Merrill Lynch Wealth Management, 777 E. Eisenhower Pkwy, Suite 900, Ann Arbor, MI 48108. Please include “Fox Children” in the memo. Envelopes will be available at the church.

Age 50, passed away suddenly on Wednesday, January 10, 2018 while on a business trip in Orlando, FL. Paul was born on June 15, 1967 in Rochester, New York, the son of Paul Robert and Sharon (Hudson) Fox. He graduated from McQuaid Jesuit High... View Obituary & Service Information

The family of Paul John Fox created this Life Tributes page to make it easy to share your memories.