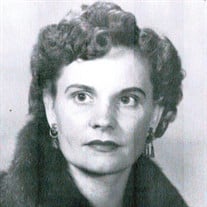 Lielkajis (Ljalis), Regina, passed away peacefully on Saturday, August 11, 2018 at the Evangelical Homes of Michigan (EHM) in Saline. She was born December 9, 1919 in Latvia. Regina’s mother was Polish and her father, Jekabs, was an officer in the Latvian Army, who was decorated for heroism in the war for independence. Regina attended Daugavpils Teacher’s College and Music Conservatory, and spoke five languages. She married her beloved husband Janis Lielkajis on July 27, 1940 in Latvia. Janis passed away in 2008 at EHM, they had no children. They escaped their homeland of Latvia which was Russian Army-occupied after WWII, and made their way to Nuremberg, Germany where they stayed in a displaced persons camp. In 1950 the Lutheran Charities sponsored them to come to Michigan. In Detroit, Regina worked for dentist James Laidlaw over 30 years until her retirement. She also became an active member of a Latvian ladies vocal ensemble. The group traveled throughout the Great Lakes region and beyond giving concerts focused on their Latvian heritage. Regina and Janis moved to Brecon Village in Saline from Westland. Regina was “A Queen” as her name translates. Her presence reflected respect and admiration from everyone who encountered her. While blessed with physical beauty, she was a woman of impish humor, sincere compassion and sociability. Survivors include nephews in Germany, and Goddaughter Julie Savarino and family of Ann Arbor, Michigan. She was a member of the St. Andrew Catholic Church and lived a full life of 98 years and 8 months. A “Celebration of Life” will take place on her birthday, December 9, 2018 at St. Andrews Catholic Church. Following cremation, the remains will be interred at the Latvian Memorial Park in the Catskills in Tannersville, NY, next to her beloved and devoted husband Janis. To leave a memory, to sign her guestbook, or for directions please visit www.rbfhsaline.com.

Lielkajis (Ljalis), Regina, passed away peacefully on Saturday, August 11, 2018 at the Evangelical Homes of Michigan (EHM) in Saline. She was born December 9, 1919 in Latvia. Regina&#8217;s mother was Polish and her father, Jekabs, was an... View Obituary & Service Information

The family of Regina Lielkajis created this Life Tributes page to make it easy to share your memories.

Send flowers to the Lielkajis family.