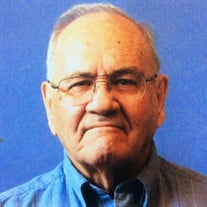 Age 91, passed away Friday, January 16, 2015 at Saline Evangelical Home in Saline, Michigan. Robert (Bob) was born on June 24, 1923 in Cumberland, Wisconsin the son of Harvey Edward and Elsie (Parker) Benjamin. He was one of eleven children. Bob graduated from Cumberland High School, joined the Army, and served overseas in World War II. After the war, he resided in Jackson, Minnesota where he was employed by the Rural Electrical Association. Later, he became an electrical inspector. He married Doris Moore in 1946 at the Presbyterian Church in Jackson, Minnesota. They had four children Craig, Cheryl, Cynthia, and David. In 1965, the family moved to Stewartville, Minnesota when Bob become a representative for the State Board of Electricity and Doris was an elementary school teacher in Stewartville. Later, they divorced and Bob retired to Wisconsin. There he married Eva Tyrrell and they made their home in Cameron, Wisconsin until Eva passed away. In 2007, Bob moved to Michigan to be near family. He resided at Brecon Village almost eight years prior to his passing. Survivors include three of his four children Cheryl Milks of Fort Lauderdale, Florida; Cynthia (David) Haugen of Ann Arbor, Michigan; David (Debbie) Benjamin of Mosley, Virginia; daughter-in-law Laurie (Craig) Benjamin of Hillsboro, Oregon; his sister, Lois (Al) Schultz of Champlin, Minnesota; his sister Jean Lombard of Rockport, Texas; his brother Donald (Betty) Benjamin of St. Croix, Wisconsin; his brother Tom (Barb) Benjamin of Rogers, Arkansas; eight grandchildren and six great-grandchildren. He was preceded in death by his parents, his son, Craig; his wife, Eva; five sisters and one brother. The family is grateful to the entire staff of Brecon Village for the excellent care they provided Bob over the past years. Cremation has taken place. Friends may share memories at Brecon Village, Saline, Michigan on Saturday, January 31, 2015 at 1:30 P.M. Burial will be held at a later date at the Northern Wisconsin Veterans Memorial Cemetery in Spooner, Wisconsin. To leave a memory, to sign Bob’s guestbook, or for more information or directions please visit www.rbfhsaline.com.

Age 91, passed away Friday, January 16, 2015 at Saline Evangelical Home in Saline, Michigan. Robert (Bob) was born on June 24, 1923 in Cumberland, Wisconsin the son of Harvey Edward and Elsie (Parker) Benjamin. He was one of eleven children.... View Obituary & Service Information

The family of Robert Benjamin created this Life Tributes page to make it easy to share your memories.

Send flowers to the Benjamin family.