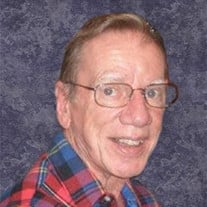 Age 75 of Pinckney, MI, passed away peacefully on Wednesday, June 18, 2014 at his home. Originally from Chicago, Illinois, Bob was born February 28, 1939. He graduated from Calumet High School in 1957, while working as a mechanic and earning certification in TV electronics repair. Bob ultimately choose his career path as an electrician and was accepted into the Chicago Electrical Workers Union, IBEW 134, in 1957, working on high rises such as the Sears Tower and experiencing encounters with the Chicago Mob. Bob moved to Saline, Michigan, in 1967. He became a master electrician and founded Tri-County Electric, an Electrical Construction Company, in 1971, currently in operation and responsible for the electrical work in over a thousand buildings in the area. Always looking for that next project, Bob restored boats, built and renovated homes and commercial properties, owning two complexes in Saline, Bennett and Crown Centers. He and wife Joan (Hayes) of 36 years, were partners in business, spiritual life, adventures like learning to fly and weekends at their lake house with their combined nine children and families. Their quiet moments were spent feeding the swans, going on boat rides and vacationing at their Florida home. Passionate, generous, skilled, and personable, Bob sat on numerous Trade and Community Executive Boards, donated to Church, the City of Saline and School activities, sponsored the Way of the Cross Mission and adopt a child programs and could carry a conversation on with anybody. He is well respected by his peers, loved deeply by friends and family and will be greatly missed by his devoted wife Joan, his four children; Karen (Glen) Gumtow, Chris Engel (Willie), Kathy (Roger) Gray and Bill (Dana) Engel, five step-children; Debbie Bonavia (John) , Wendy (Bill) Scales, Lynette (Gene) Medrea, Beth Ann (Lyle) Rentschler and Dan (Laura) Roughton, nineteen grandchildren; Andy, Jessica (Jon), Alex (Angela), Lyndsey (Nick), Jeff, Marie, Justin, Lorna, Clara, Josh, Anthony (Missy), Joe, Taylor, Tessa, Angie, Eric, Abby, Isaac and Danny, eight great-grandchildren Michael, Olivia, Dylan, Kiyah, Ari, Kailey, Kristina and Danny. He was preceded in death by his parents Robert and Jane (Dudman) Engel, who was remarried to Jim Handy. A Mass of Christian Burial will be held on Wednesday, June 25, 2014 at 11:00 A.M. at St. Andrew The Apostle Catholic Church in Saline with Rev. Fr. Francis Mossholder, celebrant and Rev. Fr. William F. Wegher, concelebrant. Burial will follow at Oakwood Cemetery in Saline. Visitation will be on Tuesday, June 24, 2014 from 5:00 P.M. to 8:00 P.M. at the Robison-Bahnmiller Funeral Home, Saline and on Wednesday, June 25, 2014 at St. Andrew The Apostle Catholic Church in Saline from 10:00 A.M. until the time of the Mass. Contributions may be made in Bob’s honor to the Ann Arbor Red Cross or Hospice of St. Joseph Mercy Hospital Ann Arbor and envelopes will be available at the church and funeral home. To sign Bob’s guestbook, to leave a memory, or for more information or directions please visit www.rbfhsaline.com.

Age 75 of Pinckney, MI, passed away peacefully on Wednesday, June 18, 2014 at his home. Originally from Chicago, Illinois, Bob was born February 28, 1939. He graduated from Calumet High School in 1957, while working as a mechanic and earning... View Obituary & Service Information

The family of Robert William Engel created this Life Tributes page to make it easy to share your memories.

Age 75 of Pinckney, MI, passed away peacefully on Wednesday,...

Send flowers to the Engel family.