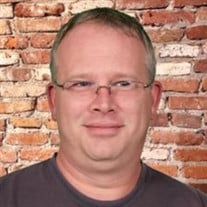 Robert (Rob) Allan Lau, 50, of Ypsilanti, Michigan, passed away, at his home, on Wednesday, May 13, 2020. Rob was born on September 14, 1969, in Ann Arbor, Michigan, and graduated from Pioneer High School in 1987. Rob enjoyed his career with Populist Cleaning Company, where he was a devoted Special Projects Manager for over 20 years, earning multiple certifications. He met his wife Sally in 2008, and they went on to have their daughter Lily, while also helping raise Sally’s son, Nicholas, together. Rob enjoyed fishing on Lake Michigan, with his brother-in-law Shannon, and having backyard BBQs with the family. He was always content tinkering with mechanics, but mostly his motor scooter, and he would never hesitate to help a friend in need. He also had a lively rivalry with Sally on the fact that his team, the University of Michigan, was far more superior to that of her team Michigan State. He had a beautiful smile, kind heart, and compassionate spirit. He will be greatly missed by his family and friends. Rob was preceded in death by his mother, Janet (Campbell) Lau. He is survived by his wife, Sally (Maka) Lau, his children, step-son, Nicholas Lehman and daughter, Lily, Rob’s sister Rebekah (Shannon) Catlett, niece Cayley and nephew Jacob, his father, Richard (Debra) Lau, as well as his in-laws, Bruno James Maka, Gary (Christine) DeVries, Jeffrey (Jenna) DeVries, and niece Charlotte. While no memorial service is currently scheduled, the family will have a private gathering at a future date. Flowers are always welcome, but contributions to help cover Lily’s education are appreciated and can be sent to the family.

The family of Robert A. Lau created this Life Tributes page to make it easy to share your memories.

Send flowers to the Lau family.