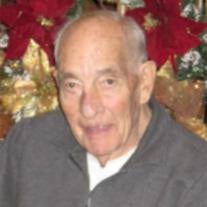 Age 90, passed away on Friday, January 20, 2012, at the University of Michigan Hospital. He was born on February 20, 1921 in Fowler, MI, the son of Albert and Augustina K. (Hafner) Martin. On August 13, 1947 in Long Beach, CA, he married Barbara Czich and she preceded him in death on November 27, 2006. Robert served in the United States Army and served during WW-II. He was a member of the Knights of Columbus, a charter parishioner at St. Gerard Catholic Church in Lansing, and a member of St. Andrew Catholic Church in Saline. Robert attended Ferris State University and graduated with a degree in Pharmacy. Later he went on to own and operate Martin’s Pharmacy in Lansing for over 20 years. Survivors include three sons; Bill (Dawn) Martin, Dave (Linda) Martin, and Steve (Karen) Martin. Other survivors include grandchildren Chelsea, Jackson, Kim, Kathleen, Brian, Mary, and Anna Martin, and one sister Alberta Irrer. He was preceded in death in addition to his wife by his parents and two sisters; Gertrude Barnes, and Rita Martin. A Memorial Mass of the Resurrection will be held on Monday, January 23, 2012, at 11:00 A.M. at the St. Andrew Catholic Church in Saline, MI, with Rev. Fr. David Rosenberg, celebrant. In lieu of flowers memorial contributions may be made in his name to the Robert and Barbara Martin Family Scholarship Fund at Ferris State University. You are able to make an online contribution by visiting the following link: https://ebill.ferris.edu/C20079_ustores/web/product_detail.jsp?PRODUCTID=62 After the first screen is filled with your gift amount, you’ll be directed to a second screen where you’ll enter "Martin Family Scholarship." Subsequent screens will help you finish executing your thoughtful gift. Checks can be mailed to the attention of Steve Martin at: Todd Jacobs, Ferris State University, 420 Oak Street PRK 101, Big Rapids, MI 49307, with the "Martin Family Scholarship" in the memo line. Envelopes will also be available at the Robison-Bahnmiller Funeral Home in Saline, MI where friends may begin calling on Sunday, January 22, 2012, between the hours of 2:00 P.M. and 6:00 P.M. and at the Church on Monday, January 23, 2012, from 10:00 A.M. until the time of service at 11:00 A.M. For more information or directions please visit www.rbfhsaline.com.

The family of Robert J. Martin created this Life Tributes page to make it easy to share your memories.

Send flowers to the Martin family.