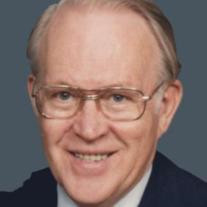 Age 89, passed away on Friday, December 16, 2011 at Brecon Village, in Saline MI. He was born in Springfield, MA on June 9, 1922. Roger was the eldest son of Roger G. and Lillian (Cabble) Edwards. The family moved to Cape Cod, MA in 1933 to run the American Metallic Fabric Company in Bass River. Roger was salutatorian of the Yarmouth High School class of 1940 and attended Worcester Polytechnic Institute for two years before serving with the U.S Army 310th Infantry in Europe from 1943 until 1946. Roger married Elaine Small Cash, also from Cape Cod, and the couple celebrated their 67th anniversary this past November. In addition to working at American Metallic, Roger worked in real estate, had a weekly radio program on WOCB, was a manager for the Cape Cod Gas Company and a title examiner for John Creney. Over the years, Roger was active in the community as a coach and officer in Yarmouth Little League, as a member of Kiwanis, the Grand Lodge of Masons - Howard Lodge F. & A.M., U.S. Power Squadron and the U.S. Coast Guard Auxiliary – Yarmouth Flotilla, and was a founding coach of the Cape Cod Aces travel girls’ hockey team. He served as a Town of Yarmouth Water Commissioner from 1963-1985. He is survived by his wife, his son Robert (Lydia) Edwards of Lenox, MA, his daughter Susan (Stephen) McDowell of Ypsilanti, MI, his brother Robert K. (Martha) Edwards of South Yarmouth, MA, and his sister Muriel Hocking of Bradenton, FL. A memorial service is being planned for the Spring of 2012 on Cape Cod. Condolences may be sent to the family in c/o Robison-Bahnmiller Funeral Home, 301 East MI Ave., Saline, MI 48176. Donations in his memory may be made to the Saline District Library, 555 N. Maple Rd., Saline MI 48176.

The family of Roger G. Edwards Jr. created this Life Tributes page to make it easy to share your memories.

Send flowers to the Edwards family.