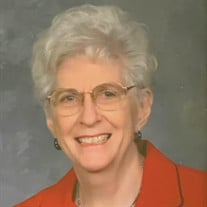 Dicks, Ruby May (Buzan), 90, of Saline, passed away peacefully on December 04, 2021. Surrounded by family in her final hours, she ultimately lost her long struggle with Alzheimer’s. Ruby was born on November 25, 1931 in Montgomery, Indiana to Eslie and Marie (Hawkins) Buzan. For health reasons, she moved to Santa Barbara, California at age eleven to live with her aunt, Floy Norman. She graduated from Santa Barbara High School in 1950 and shortly thereafter met her loving husband of sixty-seven years, John Dicks, on New Year’s Eve 1951. They married on September 12, 1952. Soon after, they moved back to his hometown of Saline, Michigan where she was lovingly welcomed into his family while he was deployed overseas in the U.S. Army. It was there she began a long career as a secretary with the U.S. Fish and Wildlife Service. In addition to being the mother of two children, she was an active member of the First Presbyterian Church of Saline as a Sunday School teacher, deacon, elder, and choir member. She was a member of the Order of the Eastern Star, where she and John enjoyed their time with special friends in Chapter #311. Ruby was a dedicated mother and grandmother, first and foremost, who embraced every moment with her children and grandchildren. She was a kind woman who always made those around her feel loved and at ease. She had a love of music and enjoyed playing the piano at home for her family; she was skilled with her knitting, sewing, and needlepoint; and she loved playing cards and Scrabble with her friends. She is survived by her daughter, Cindy (Chris) Kelly of Flint; granddaughter, Brooke Kelly of Grand Rapids; grandson, Christopher Kelly of Flint; beloved sister, Elsie Elliott of Loogootee, IN; and many dear nieces and nephews. She was preceded in death by her husband John Dicks, son Roger Dicks, parents Eslie and Marie Buzan, sisters Gladys Brown and Laura Miller, and brother Thomas Buzan. The family would also like to extend a special thanks to Western Hills Living in Flint, MI for the wonderful care given to Ruby in her final years. In her memory, donations can be made to Heartland Hospice, First Presbyterian Church in Saline, or O.E.S. #311. Services were held in private. To leave a memory you have of Ruby or to sign her guestbook please visit www.rbfhsaline.com.

Dicks, Ruby May (Buzan), 90, of Saline, passed away peacefully on December 04, 2021. Surrounded by family in her final hours, she ultimately lost her long struggle with Alzheimer&#8217;s. Ruby was born on November 25, 1931 in Montgomery, Indiana... View Obituary & Service Information

The family of Ruby Dicks created this Life Tributes page to make it easy to share your memories.

Send flowers to the Dicks family.