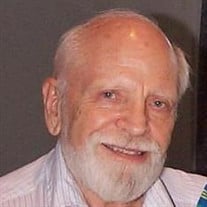 Age 92 passed Saturday, March 7, 2015. Our Papa was born July 14, 1922 in Krems, Austria to Dr. Rudolf and Mathilde (Barth) Hanel. He studied Physics at the Technical University in Vienna, Austria, obtaining his Ph.D. in 1953. From 1953 to 1959 he served as a Research Scientist at the U.S. Army Signal Laboratory in Ft. Monmouth, NJ. In 1958 he married Iduna Zeitlinger in Hinterstoder, Austria. They were happily married for 56 years. From 1959 to his retirement in 1990 Rudy worked at NASA’s Goddard Space Flight Center in Greenbelt, MD. He designed the first scanning infrared radiometers for the Tiros and Nimbus Missions flown around Earth. One of his major contributions to satellite meteorology came from the design and application of Infrared Interferometers (IRIS) flown twice on Nimbus spacecraft. The success of the interferometers led to the acceptance by NASA of a proposal by Rudy and his research team to investigate Mars with an improved version of such an interferometer on the Mariner 9 orbiter. An even more advanced interferometer was one of 11 experiments included by NASA for the Voyager 1 and 2 Missions to the outer planets and the edge of our solar system. Some of the IRIS mission highlights included the identification of sulfur dioxide in the volcanic plumes of Jupiter’s moon Io and the discoveries of numerous hydrocarbon, nitrile, and carbon dioxide molecules in the stratosphere of Saturn’s moon Titan. Rudy published over 100 scientific papers, and authored several chapters in scientific books. Along with colleagues, he authored a well-used textbook titled Exploration of the Solar System by Infrared Remote Sensing. Throughout his career he was recognized for his innovative, experimental approach to exploring the planetary atmospheres, receiving awards from NASA, the American Astronautical Society, the American Meteorological Society, and the International Society of Optical Engineering, among others. On his last birthday he was honored for his scientific contributions at Goddard during a 10th anniversary celebration of the Cassini/CIRS mission launch. Both professionally and in his spare time Rudy traveled around the world, including trips with his family across the US and Canada in his beloved VW camper, accumulating an extensive collection of wonderful photos. He was a skilled woodworker, building and restoring furniture with his wife as well as rehabilitating houses. He was an early proponent of energy conservation and a proud owner of a 2001 Toyota Prius. He loved Classical and Baroque music, history from the Antiquities to the present, discussing politics, and reciting German and Latin poetry from his high school days. He moved from Brookeville, Maryland to Ann Arbor, Michigan in 1998 to be near family. Rudy is preceded in death by his brother Bertl (Anni) and dear friends and colleagues. He leaves behind his wife, Iduna, of Ann Arbor, MI, daughters and son-in-laws Ina and Michael Gerdenich of Ann Arbor and Selma and Stuart Rosenthal of Fayetteville, NY, and grandchildren Eric, Gregory, Rudi, Katie, and Alex. He is also survived by several nieces and nephews and friends on both sides of the Atlantic. The family wishes to thank the surgical and ICU teams at St. Joseph Mercy Hospital, Ann Arbor and the staff at the Evangelical Home, Saline for their magical abilities and compassion. A life celebration will take place in the summer. If you wish, donations may be sent to the Evangelical Home-Saline, 440 W. Russell Street, Saline, Michigan 48176 (attn: Melissa, Accounting) or a charity of your choice.

The family of Rudolf Albert Hanel created this Life Tributes page to make it easy to share your memories.

Send flowers to the Hanel family.